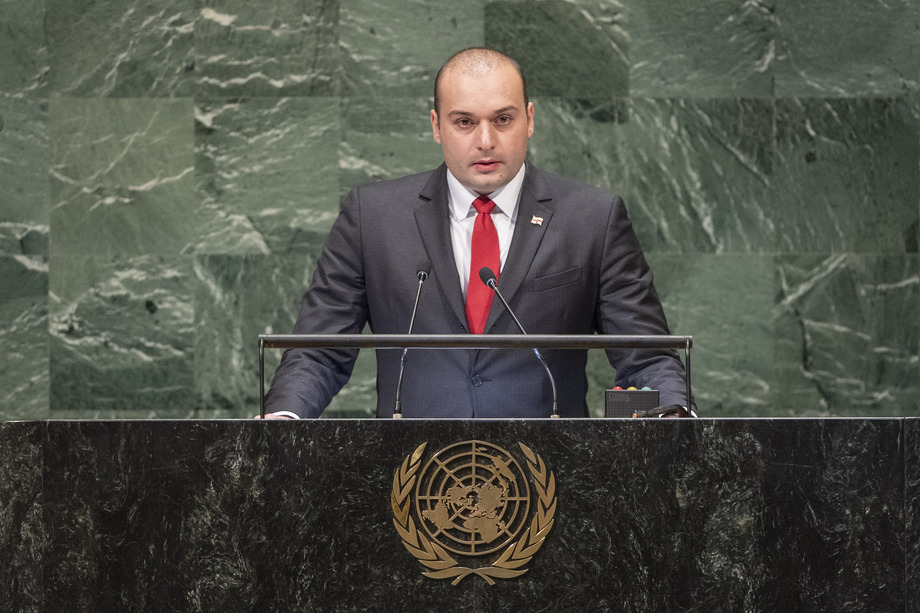 MAMUKA BAKHTADZE, Prime Minister of Georgia, said he was honoured to address the Assembly in his native language on the twenty-fifth anniversary of the painful occupation of Georgia’s historical regions.  Ten years ago, the Russian Federation launched another large-scale military aggression which resulted in the full occupation of Abkhazia and Tskhinvali.  The situation in those regions is dire and alarming, and constitutes a humanitarian disaster as militarization and depopulation efforts intensify.  He said Moscow’s motivation is a military intervention with the aim to establish military bases on Georgian territory.

Following the many human rights violations perpetrated in those regions, the Otkhozoria‑Tatunashvili list was created to monitor rights violators and bring them to justice, he continued.  Blatant disregard for the rule of law in occupied territories has created serious challenges for Georgia and the region as a whole, he said, calling on the international community to firmly support the principle of sovereign equality.  He added that the Russian Federation is not fulfilling its obligations under the 2008 ceasefire agreement.

Georgia is proposing a new peace initiative designed to provide people in occupied territories with access to health care and education services and to create commercial opportunities, he said.  The Government is committed to protecting and guaranteeing the rights of every Georgian.  He urged the Russian Federation not to undermine the initiative.  The pursuit of national interests must be based on mutual respect, he stressed, adding that Georgia is an organic part of Europe and continues on its path to cooperate with the European Union.

He went on to say that Georgia’s recent progress in democratic consolidation, respect for human rights and strengthening the rule of law is the result of fundamental reform processes.  Development strategies in the country focus on strengthening human capital, including an ambitious education reform.  The protection of fundamental human rights and dignity is a national priority and Georgia has emerged as the region’s leading reformer.  Protections of fundamental rights are enhanced by freedom of the media and the active participation of civil society actors in defining the process of democracy building.

Turning to development matters, he said Georgia’s sustainable development policy focuses on the establishment of green and digital economies.  That reform process is transforming Georgia into an economic, tourism, logistics and education hub.  A new initiative to transform the Black Sea region into a space for peace and development has also been proposed, he said.  In addition, relations with NATO are dynamic and comprehensive as the country aspires to join that organization.  He affirmed that Georgia stands with the international community in the fight against transnational terrorism.  However, the global security system is eroding, he said, adding that United Nations reform remains relevant.