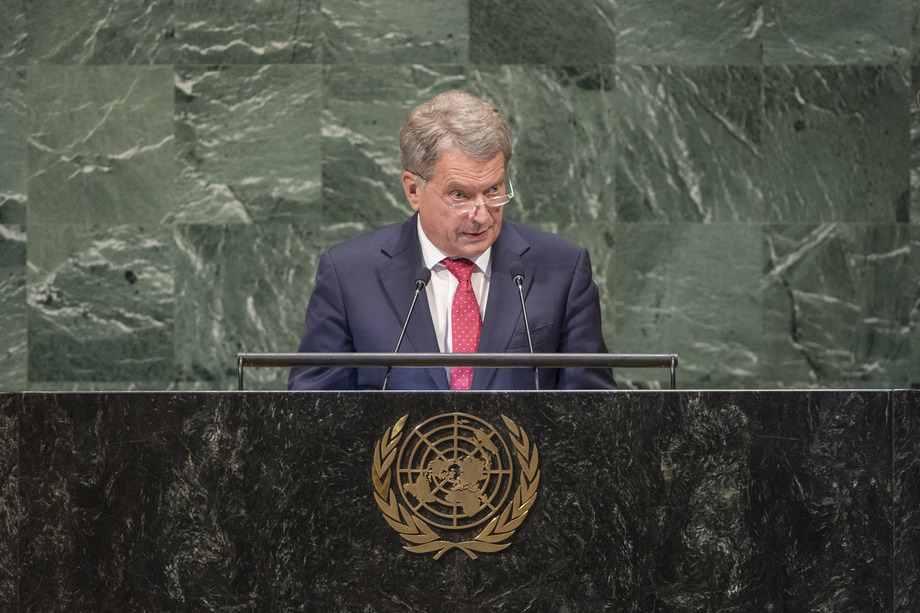 SAULI NIINISTÖ, President of Finland, voiced strong support for multilateral cooperation while warning that there is reason to be worried for all those who believe in its benefits.  The international system is visibly under pressure and its capability and credibility are being questioned.  Countries can no longer take the international rules-based order for granted.  “It is our common responsibility to actively defend and develop it,” he said, describing the United Nations as the core of that system and urging its Member States to show their will to act together — “not past each other”.

While expressing support for the Secretary-General’s reform agenda, aimed at ensuring that the United Nations of the future is more transparent, accountable and efficient, he underscored that the Organization must practice what it preaches for it to be credible.  Any case of sexual exploitation among the United Nations own ranks is one case too many.  In addition, many of today’s global challenges cross the boundaries between the pillars of peace and security, human rights and development, and many of the Organization’s recent achievements — including the 2030 Agenda, the Paris Agreement on climate change and the Global Compacts on Migration and Refugees — reflect that interlinked nature.  However, more action is still needed on those issues, including efforts to ensure that global temperature rise is kept to well below 2°C.

“In the North, we are witnessing how the Arctic region is warming at an alarming pace,” he said, emphasizing that the challenge was not just a regional one but also a threat to the entire global climate system.  Left unchecked, climate change will also lead to a further increase in migration flows, adding to the 65 million people who are already displaced.

Full-scale wars, conflicts of varying intensity and breaches of international law continue, he said.  Urging the international community to remain persistent in their effort to resolve such conflicts, he nevertheless spotlighted positive developments including a genuine dialogue between the Democratic People’s Republic of Korea and the international community, bringing momentum towards a peaceful Korean Peninsula.  “A successful outcome in that region could set a powerful example for non-proliferation and disarmament elsewhere, too.”

Turning to peacekeeping, he said the relevance of United Nations blue helmets remains beyond doubt.  However, they also need to adapt to changing realities, he said, expressing support for the Secretary-General’s Action for Peacekeeping initiative to make United Nations peacekeeping more effective.  While mediation is a valuable conflict prevention tool, peace and security, human rights and development are not sustainable without the participation of women and youth.  “Female voices and young voices must be heard and acted upon,” he stressed, highlighting the work of the Nordic network of women mediators and its support for related global campaigns such as the United Nations Entity for Gender Equality and the Empowerment of Women’s (UN-Women) HeForShe initiative.