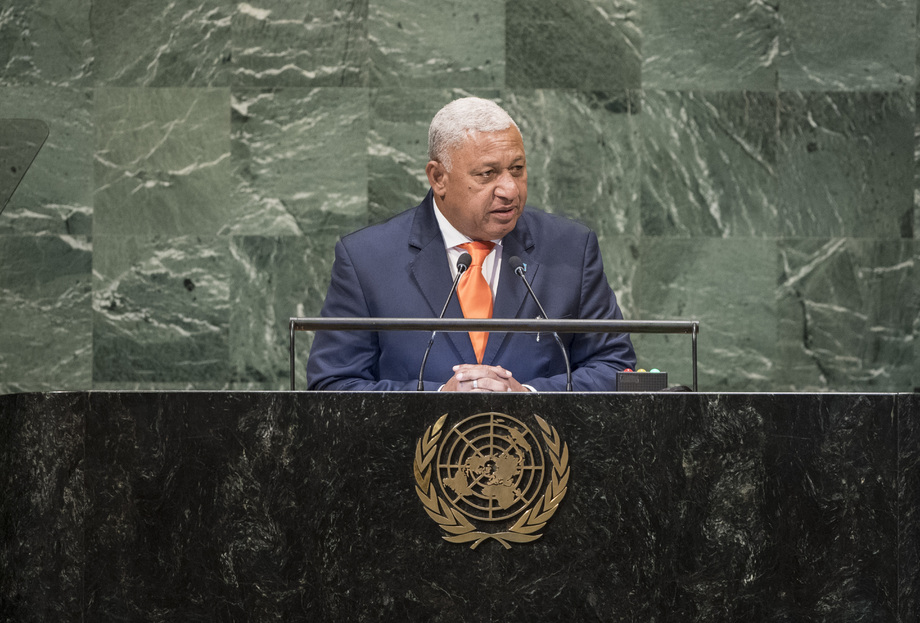 JOSAIA VOREQE BAINIMARAMA, Prime Minister of Fiji, spotlighting his country’s willing and energetic contribution to United Nations peacekeeping operations, said it is also “putting every ounce of energy we have into the fight to save this planet and its people” from the catastrophic impacts of climate change.  Expressing pride in Fiji’s democratic process and its inclusive society, he highlighted its high literacy rate and strong social safety nets in particular.  Meanwhile, the Government awards micro‑business grants in order to lift people out of poverty and reward and encourage self‑reliance and entrepreneurship.

Fiji has also strengthened its independent institutions, he continued, noting that they protect consumers, fight corruption, provide legal assistance and advocate for and promote human rights.  Tolerance and personal freedom are also critical principles for the Fijian people, he said, adding that they drove its decision to seek membership on the Human Rights Council in an upcoming session.  “Fiji looks to a future free of racism, nepotism and privilege,” he said, calling for all people to be guaranteed their rights and protected by robust constitutional frameworks.

Recalling that Fiji has seen first‑hand how intolerance leads to repression, violence and mass migration, he said its own ugly historical experience corroded peoples’ trust in each other and their sense in who they were as a nation.  “We must remember it so that we do not repeat it, and we will never stop working to keep it in our past,” he said.  Today, Fiji is in its ninth year of strong economic growth, due in large part to the democracy that has taken root and is flourishing.  “When people see that they have opportunity, that they can get justice, that they can speak their minds and be heard […] they invest their money and sweat in their futures and in greater possibilities for their children,” he stressed.

However, he continued, that optimism must be nurtured and supported through intelligent Government actions.  Fiji has reformed its tax laws to make them simpler and more just and is working to ease the burden on those who have little, ensuring that everyone pays their fair share.  Also spotlighting critical Government support to small‑ and medium‑sized enterprises — resulting in explosive growth and extraordinary innovation in that sector — he went on to describe the disastrous impacts of climate change on his country.  Crops have been washed away and homes destroyed.  In that regard, he outlined national mitigation efforts, voicing impatience over other world leaders “who proclaim their deep concern […] and then do little or nothing”.  Fiji will be a net‑zero greenhouse‑gas emitter by 2050, he stressed, urging other nations to commit to the same goal.