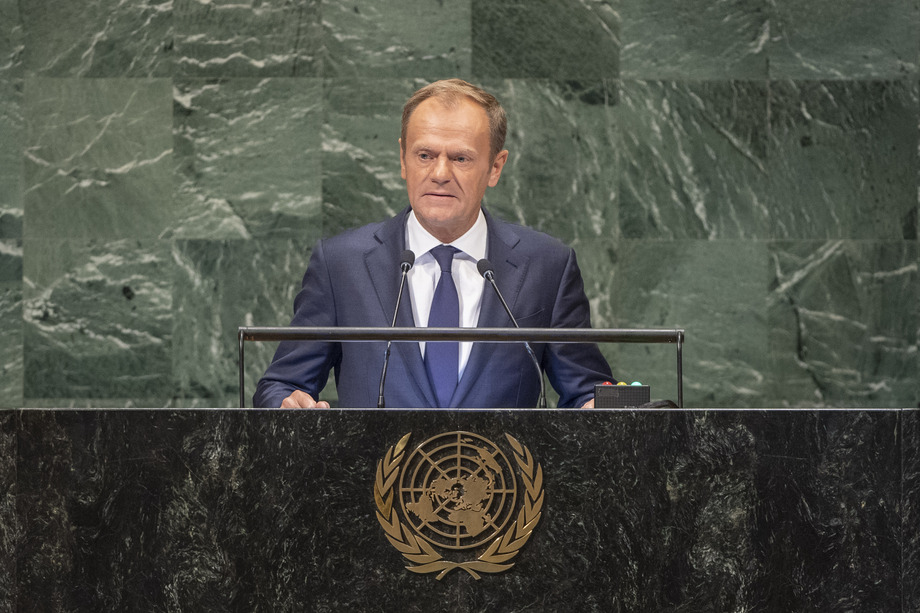 DONALD TUSK, President of European Council of the European Union, said his bloc was fighting to protect the international world‑based order which is currently under great strain.  The countries of the European continent care about respect and solidarity between nations, as well as unity and collective action in addressing the pressing issues before the United Nations.  The European Union supports the plans to reform the United Nations, reforms that are long overdue, he observed.  The Union has stepped up efforts to maintain peace and security in Europe and has taken action against the increased use of disinformation in elections.  The anonymity of cyberspace allows nefarious actions to be disguised and the United Nations should help expose this phenomenon.

Increased relations between the European Union and the African Union has allowed the European Union to help people to safely leave Libya, adding that the two organizations will continue that productive cooperation.  Regarding the migration crisis, only collective action will solve the situation.  The European Union will continue to work with partners on search and rescue efforts in the Mediterranean. The bloc is also involved in resettlement efforts including Syrian refugees from Turkey, he said, calling for the full implementation of the Idlib agreement and for all to respect international law.

Sustainable development and continent‑to‑continent activity will bring societies closer together, he said, pointing out that climate change will be one of the most important issues the world faces.  He appealed to all leaders to protect the waters around the Antarctic.  As well, by establishing maritime sanctuaries in the Southern Ocean, many species of wildlife will be saved.

Regarding nonproliferation, he observed that the situation has improved, although much depends on the attitude of the Democratic People’s Republic of Korea.  Clearly, diplomacy is the productive way forward.  A similar situation exists in Iran, where the European Union is committed to the Joint Comprehensive Plan of Action, as long as Iran remains committed to it.  Recalling the late former President of South Africa, Nelson Mandela’s message, he urged Members not to give up.