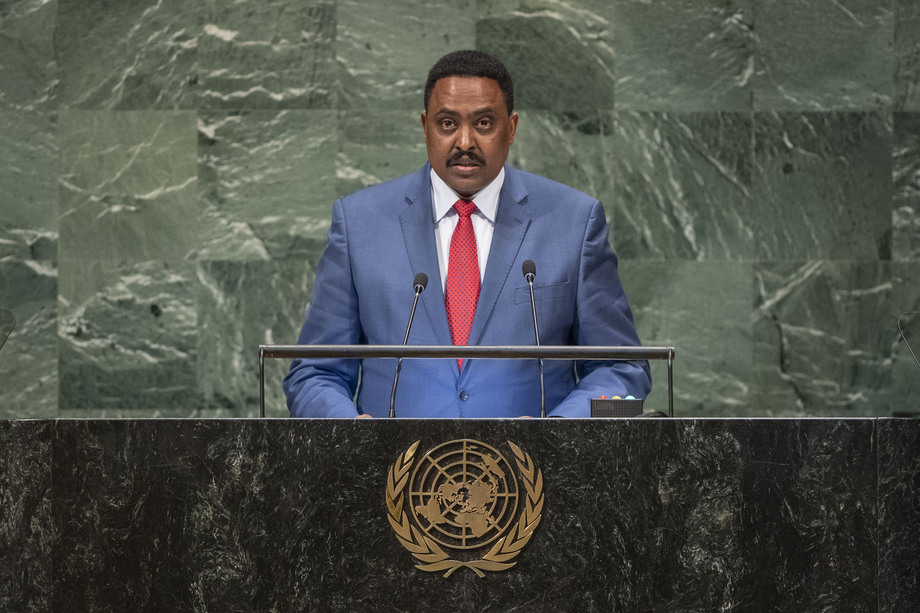 WORKINEH GEBEYEHU NEGEWO, Minister for Foreign Affairs of Ethiopia, stressed that amid serious challenges multilateralism is needed more than ever, adding that the United Nations is the only universal organization represents the same ideals today as it did at its inception: freedom, equality and justice.  Ethiopia is a founding United Nations member; its contribution to peacekeeping is second to none and it fully endorses the Secretary-General’s Action for Peacekeeping initiative and the Declaration of Shared Commitments to United Nations Peacekeeping.

The peaceful power transfer that took place six months ago in Ethiopia opened a new chapter in the country’s political and social history, offering realistic and genuine possibilities of change that will meet the hopes and expectations of youth and that have been embraced by Ethiopians nationwide.  Highlighting the strength and resilience of Ethiopians in times of adversity, he made clear that “no difficulties are insurmountable”.  Reforms necessary to promote democratic governance and the rule of law, fairness and justice, better financial and economic management, transparency and accountability are under way.  “In the last six months we have exerted every effort to make sure all this, together with our message of forgiveness and reconciliation, strengthens the unity and solidarity of our people,” he said.

Turning to the Horn of Africa, he noted the launch of reconciliation across the region, thus starting a real process of normalization, pointing to the end of the two decades of conflict between Ethiopia and Eritrea and the re-establishment of diplomatic relations between Eritrea and Somalia.  Furthermore, a trilateral summit among Eritrea, Ethiopia and Somalia was held in Asmara earlier in the month, followed by a visit to Djibouti, a clear demonstration of the value and effectiveness of African solutions to African problems.  Recently, Ethiopia and Eritrea signed a further comprehensive agreement.  “In light of these important and positive developments, it is only appropriate and timely that the Security Council now seriously considers lifting the sanctions imposed on Eritrea,” he said.

Such major developments offer “a start to unravelling years of conflict and suspicion across the region”, he said, adding:  “A region which has been one of the most conflict-ridden in Africa, Horn of Africa is indeed becoming hope of Africa.”  It is equally important to extend the process to promote a regional economic integration framework to fight poverty, which will both help rid violence and war as well as promote deeper regional and continental integration in line with Agenda 2063.  Regional integration is the only viable option for meaningful development, he said, as the historic, cultural, social and linguistic links that bind the people of the region form a proper basis to strive for common prosperity.  Lastly, he reaffirmed his support as a non-permanent member of the Security Council in the efforts of creating peaceful, equitable and sustainable societies on the African continent.