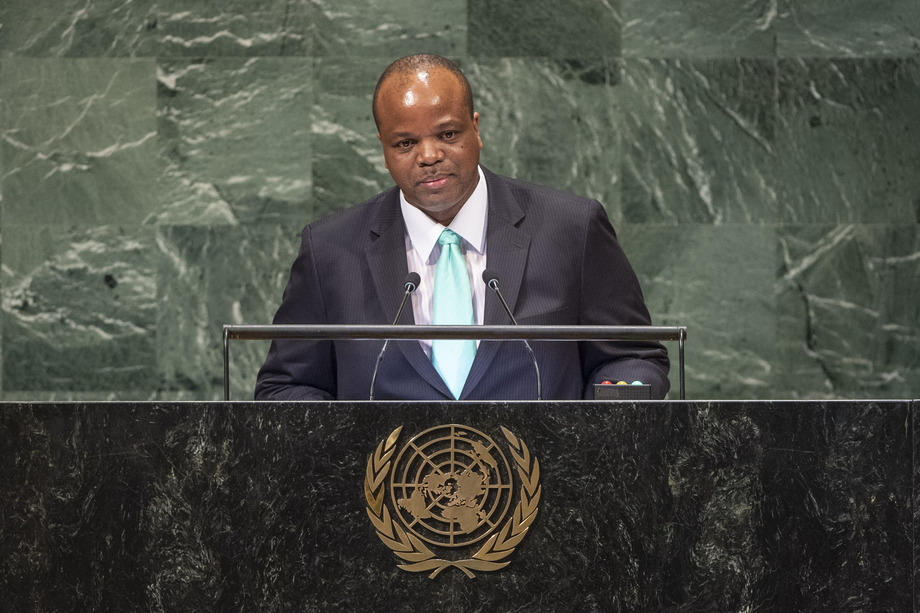 MSWATI III, Head of State of Eswatini, expressed support for Assembly resolutions aimed at repositioning the United Nations development system to better support countries in their efforts to achieve the Sustainable Development Goals under stronger national leadership and international cooperation.  Citing the existence of pockets of tensions across the globe “which require that all Member States speak in one voice when providing peaceful solutions”, he warned that a fragmented approach will render peaceful solutions elusive.  Appealing to countries embroiled in conflict to come up with “home‑grown solutions” to address their differences, he urged them to avoid the use of force and employ dialogue.  “Where there is no loss of blood, unity prevails, whereas violence begets instability,” he said.

Outlining another major concern, he said the imbalance between rich and poor people continues to widen despite attempts to implement the Sustainable Development Goals.  Such imbalances contribute to terrorism and social strife, he warned, voicing support for Agenda 2063 and its goal of improving lives and realizing a well‑developed Africa by that date.  Expressing support for such programmes, he said the slow progress of development adds to many countries’ burdens and prevents them from meeting the needs of their people.  “We need to find ways and solutions to speed up the process of developing sustainable economies […] by removing the stumbling blocks to development,” he said.

Emphasizing that “no country deserves to go for a whole year without investment”, he warned against leaving developing countries behind.  The African continent, in particular, still faces challenges including such diseases as Ebola, HIV/AIDS, malaria and tuberculosis, and will continue to do so without funding.  All citizens must have access to basic services such as clean water, health care and free primary education.  Commending countries that have succeeded in providing those, he spotlighted the need to reduce unemployment and care for older persons as additional important global challenges.

Calling for international cooperation as well as alternative means of funding, he noted that Africa continues to absorb more peacekeeping missions than any other United Nations regional grouping.  “This qualifies Africa [for] proper representation in areas of peace and security,” he stressed, emphasizing that the continent’s voice must be heard and featured prominently and permanently at the United Nations.  As talks on Security Council reform progress, he stressed the need to consider the common African position — namely, calls for the allocation of no fewer than two permanent Council seats with all the prerogatives and privileges of permanent membership, including the veto power, and five non‑permanent seats.

He went on to outline national progress made in mainstreaming the targets of the Sustainable Development Goals and Agenda 2063 into Eswatini’s development framework.  Among other things, the country has made strides in localizing and integrating the Goals into its planning processes; finalized the review of its National Development Strategy (1997‑2022); and will soon launch a revised National Strategy, he said, adding that the latter’s theme will be “sustainable development and inclusive growth”.  Among other things, he also spotlighted achievements in innovation and research as well as the country’s successful holding of free, fair elections earlier in September.