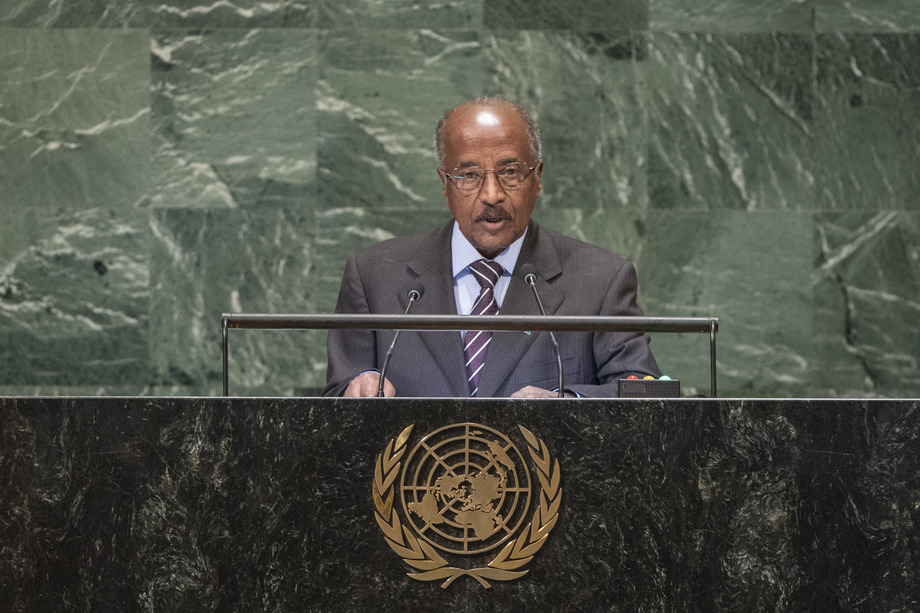 OSMAN MOHAMMED SALEH, Minister for Foreign Affairs of Eritrea, recalled the recent peace agreement between Eritrea and Ethiopia that ended two decades of war, constant tension and strife.  “This historic agreement — even if belated by almost 16 years — will allow both countries to funnel their resources, potential and positive energy solely towards much-needed development,” he said, noting that the agreement has already infused hope and optimism.  He emphasized the accord’s positive dividend for regional peace and security and thanked all parties who contributed to the process.

He said that the sanctions imposed on Eritrea in December 2009 and 2011 respectively were unwarranted and a perplexing injustice.  With “positive winds of peace flowing in the region, he echoed the call of several Security Council members for their immediate lifting.  Some countries are looking for procedural and other pretexts and preconditions apparently aimed at moving the goalpost and maintaining the illegal sanctions on Eritrea.  “As an aggrieved party on the receiving end of the miscarriage of justice, Eritrea cannot and will not plead for clemency or magnanimity,” he said.  “The people and Government of Eritrea will continue to stand up for their rights until justice is ascertained and wrongs meted to them are redressed.”

Calling the transgressions perpetrated against Eritrea symptomatic of hubris and perverse power games governing international relations, he noted that spiralling crises, instability and wars in the world are inevitable consequences of the absence of justice and the attendant outcome of international power imbalance.  The sanctions were due to the imposition of the United States as the principal architect using its unassailable power to advance a misguided regional agenda, the inability of the United Nations system to prevent such wrongs from happening as well as systemic flaws and political horse-trading in the Security Council.  This happened even though previous Ethiopian regimes had flagrantly violated the United Nations Charter and the Algiers Peace Agreement.  He argued that the principal architects of the sanctions resorted to regional Trojan Horses to imbue an “African face” to their resolutions.

The sanctions caused economic damages to the country and unnecessary hardship for its people, he said.  The related smear campaigns and defamation have caused immeasurable damage to Eritrea’s reputation and investment prospects, while the cost and loss of opportunity resulting from regional instability and insecurity — perhaps the greatest damage caused by the sanctions — has been huge.  He underlined the resilience and hard toil of the Eritrean population to advance justice and foster a climate conducive to security and stability amid the unfair sanctions.  “The people of Eritrea have not committed a crime or transgression that impels them to seek clemency,” he reiterated, calling for an immediate rescinding of the sanctions and amends for the damages incurred and opportunities forfeited.