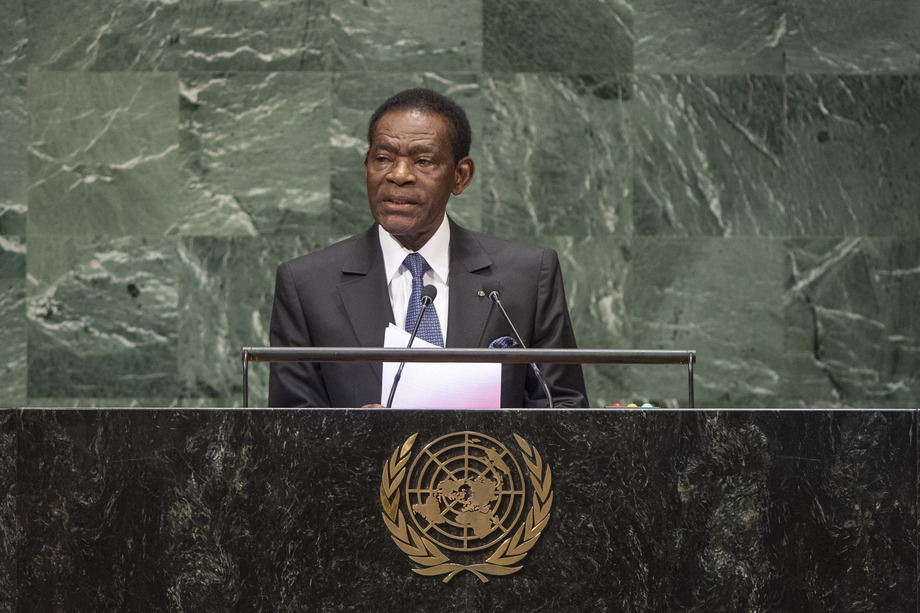 TEODORO OBIANG NGUEMA MBASOGO, President of Equatorial Guinea, noting that 2018 marks the fiftieth anniversary of his country’s independence, said the well-being of humanity — a fundamental goal of the United Nations — could not have been achieved without freedom and dignity for the peoples and nations of the world.  People who were subjected to the will of others when the Organization was founded in 1945 are now free, he said, calling for an end to colonialism wherever it still exists, and in whatever form it takes.

Despite efforts at the United Nations to promote sustainable development, an ever-widening gap between developed and developing countries makes it hard to maintain international peace and security, he said.  National pride must be set aside in the quest to achieve the Sustainable Development Goals and Agenda 2063 of the African Union.  Massive migration from the south to the north, internal instability in developing countries, terrorism and rebel movements are reactions to poverty and underdevelopment which result from the absence of solidarity and justice.

As a non‑permanent member of the Security Council, Equatorial Guinea supports preventative diplomacy and the peaceful settlement of conflicts, he continued.  He emphasized the principles of international law, respect for the sovereignty of States, non‑interference in other States’ affairs and the rights of countries to exploit their own resources, to name a few.  He also applauded peace efforts between Ethiopia and Eritrea, the United States and the Democratic People’s Republic of Korea, among others, stating that similar paths should be taken to resolve other conflicts.

Emphasizing that coercive measures have never resolved conflicts, but run counter to the principle of State sovereignty, he said the Security Council must be reformed to make it more democratic and representative.  Its current structure is obsolete because the political criteria that prevailed in 1945 no longer govern the world.  Africa is the future of humanity and it should not be disenfranchised and left out of major decisions, he said, adding that the Council should shoulder its responsibility for recent conflicts in the Sahel and for uncontrolled migration from Africa to Europe.

Reviewing the situation in his country, he said its economic emergence will be achieved in a relatively short period of time.  Politically, the transition to a multiparty system has been characterized by open dialogue, with 18 political parties — in a country of less than 1.4 million people — now recognized.  Pointing to Constitutional amendments, including presidential term limits, he called on friendly nations and multilateral organizations to support the Government’s economic reforms.  The United Nations, he underscored, should not only be a forum for dialogue, but also a forum for cooperative exchanges to promote the development of humanity.