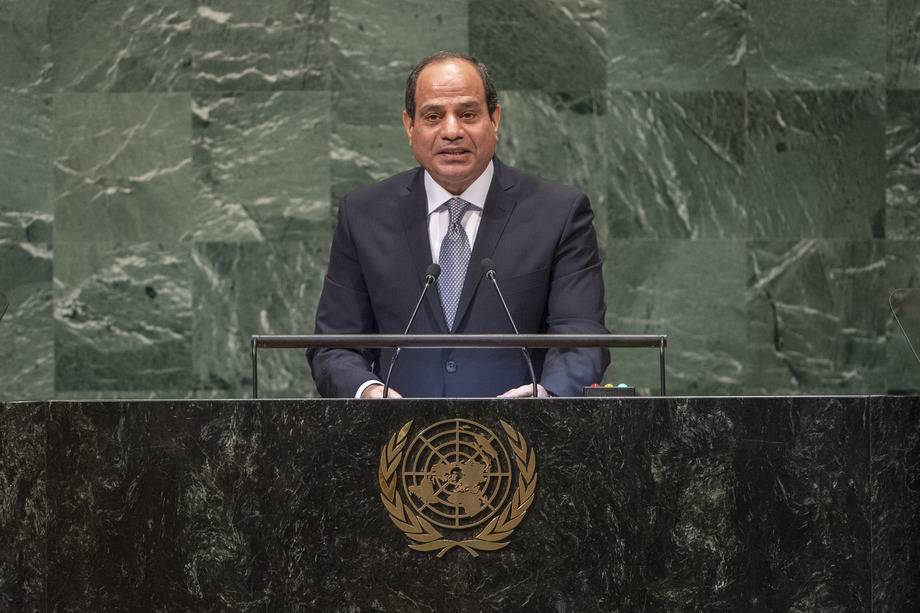 ABDEL FATTAH AL SISI, President of Egypt, pointed to a flaw in the international system, which negatively affects its performance and casts a dark shadow over its credibility in the eyes of many people, particularly in the Arab and African regions.  “Developing countries can ill afford to exist in an international order, which is not governed by laws,” he continued.  There is no doubt that the Arab region is one of the most vulnerable to the dangers of nation State disintegration, and the ensuing creation of a fertile environment for terrorism and the exacerbation of conflict, he said.

There can be no way out of the crisis in Syria and the plight of Yemen, except by restoring the nation State, preserving its sovereignty and Government institutions, he said.  Expressing support for the United Nations–led political solution in those two countries, he said the same principle applies to the policy in Libya, where Egypt plays a pivotal role in support of rebuilding the State.  A year has passed since the adoption of the United Nations action plan on Libya.  And despite the commendable efforts of the Organization in numerous conflicts, including South Sudan, the Central African Republic and Mali, many have fallen short of finding permanent settlements to such disputes, he said.

“We cannot talk about the peaceful settlement of disputes without citing the Palestinian cause,” he continued, adding that the situation there is a “perfect example” of the failure of the international system to find a just solution to a conflict.  Political will to resume negotiations and achieve a settlement is key.  “I repeat here what I have said in previous years on this platform, the Arabs are still stretching out their hands in peace,” he said.

Pledging commitment to sustainable development, he emphasized the critical need to “tackle the financing for development conundrum”.  That can be achieved through the creation of an enabling environment which allows for the free flow of resources necessary for development, without imposing any conditionalities.  He welcomed the United Nations serving as a platform for developing ideas to achieve this reform.  He emphasized the importance of strengthening partnerships between the United Nations and regional organizations, to meet the rising challenges the international community faces at the political, economic and developmental levels.

Egypt will shortly resume the presidency of the African Union in 2019, he said, adding his Government was looking forward to strengthening the strategic partnership between the Union and the United Nations.  Egypt plans to implement the initiative launched during its membership of the United Nations Security Council focused on boosting cooperation to counter-terrorism and the terrorist narrative.  Egypt needs to also address the major shortcomings in the international community’s handling of human rights issues.  He said that Egypt has a solid constitutional foundation for the protection of human rights.  Major strides have been achieved in the field of women and youth empowerment.  Women now hold 25 per cent of the ministerial posts and more than 15 per cent of the seats in Parliament, he said.