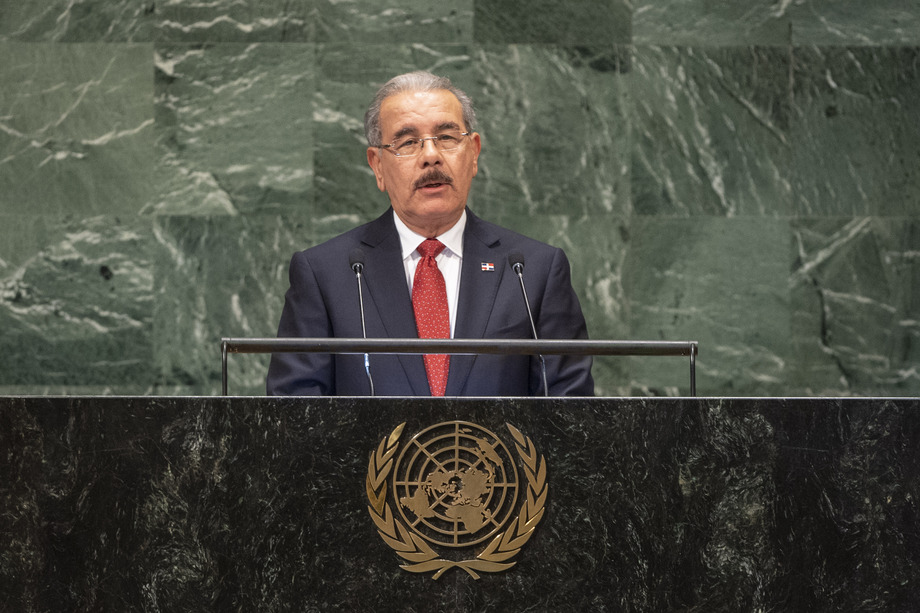 DANILO MEDINA SÁNCHEZ, President of the Dominican Republic, noted that despite the central role of the United Nations in maintaining a more stable, secure world for all, we can never consider that stability a definitive achievement nor lower our guard.  In the Latin American and Caribbean region, 35 per cent of the population still belongs to “the so-called ‘vulnerable class’”, meaning they can fall back into poverty at any setback.  “Living peacefully and without fear is almost a utopia because of the control exercised by organized crime” in territories in the Americas and worldwide, he said, identifying climate change, drug trafficking and organized crime as main threats to stability and global security.

Addressing the increasing frequency of natural hazards, he said that the typhoon that recently hit the Philippines “with a force not seen in decades” and the cyclonic seasons in the Caribbean mean “there’s not a safe spot on the planet”.  Adding the impact of Hurricane Irma on Havana, how Hurricane Maria claimed human lives and brought economic losses to Puerto Rico, Antigua and Barbuda, and other Caribbean areas, he affirmed his country’s strong commitment to preventing the consequences of climate change.  The work of building, preparing and raising awareness must begin at the local level where the daily life of people develops, which is where his Government is improving resilience and relocating communities living around important watersheds vulnerable to weather phenomena.

However, efforts must also be national and international, he continued.  At the national level, his country is planting millions of trees and investing in renewable energy as never before, which will reduce greenhouse gas emissions by 25 per cent by 2030.  However, he added, the fight against climate change is everyone’s task, urgently requiring the financing and operationalizing of such initiatives as the Warsaw International Mechanism to compensate for the destruction of infrastructure and ecosystems and protect residents.  As an example, the storms Olga and Maria caused $1 billion worth of infrastructure damage in his country.

Turning to the threat of drug trafficking, he said it claims thousands of lives, mainly young ones, every year, also permeating national institutions, unbalancing economies, threatening values and degrading the social fabric.  Similarly, “wherever organized crime arrives, the security and peace of our people deteriorates over time”.  As with climate change, the fight against drugs must be local, national and international.  He cited local intervention in his country that focuses on prevention campaigns, education and training for the young, as well as improving neighbourhoods and recovering public spaces.  At the national level, security forces and the National Drug Control Department are fighting narcotics trafficking across the country.

Internationally, the country has bilateral and multilateral agreements with the United States, European Union and Central American Integration System countries, and participates in the Caribbean Basin Security Initiative.  Calling for deeper international coordination, he stated that countries whose domestic demand for drugs has “set in motion the international machinery of drug trafficking and organized crime” must show greater commitment.  He added that developing nations act as the first barrier, “thus protecting the most developed countries”.  As with climate change, developed countries with greater consumption capacity must deploy more resources, cooperation and political will “if we really mean to fight this phenomenon with any hope of victory”.  If the United Nations and developed countries want to fight poverty, the two fronts of drug trafficking and climate change “are a smart, humane and cost-effective way to do it”.