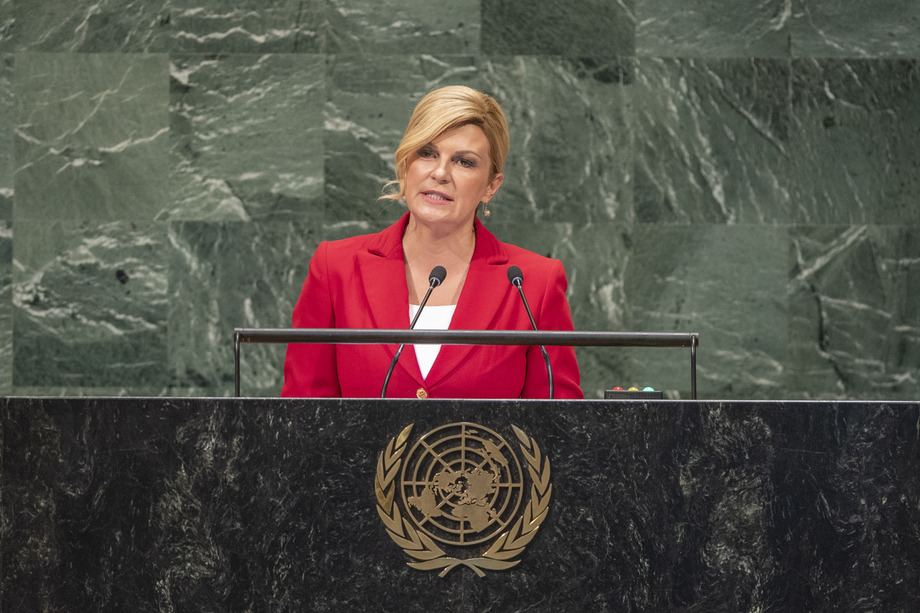 KOLINDA GRABAR-KITAROVIĆ, President of Croatia, said her country’s football team competing in the FIFA World Cup final united the world with accolades from around the globe that expressed a common aspiration for excellence.  Croatia, not big in size, population or economic means, showed that success is achieved through teamwork.  Likewise, members of the United Nations must act as a team to maintain its relevance and effectiveness in the face of various global challenges.

Highlighting Croatia’s fifth year of membership in the European Union, she underscored how her country was a telling example of the transformational force of being in that bloc, adding that freedom and prosperity have become standards, not just mere ideals.  She expressed strong support for further European Union enlargement to her country’s southeastern neighbours, while cautioning against the long‑lasting damage caused by inflammatory and revisionist rhetoric used to address short‑term domestic political needs.

There is a risk of legal uncertainty and political and institutional instability in Bosnia and Herzegovina after the upcoming October elections, she stated, adding that this is due to the failure to amend the electoral framework to fully respect the rights and equality of the three constituent peoples — Bosnians, Croats and Serbs in line with the Constitutional Court decision on the legitimate and proportionate representation of constituent peoples at all levels of Government, including the Presidency.

While acknowledging the Belgrade‑Pristina dialogue must be completed by the two concerned parties, she warned against proposals with potential regional implications, notably territorial modifications or exchanges.  Opening the “Pandora’s Box of potential new territorial claims” could generate serious instability and security threats, she added.

Recalling that no country can shield itself from the consequences of climate change, she said that, with over one thousand islands, islets and reefs, Croatia may soon be exposed to the danger of rising sea levels.  While stressing the need of balanced United Nations reforms, she welcomed the results and trajectories established in 2018.  “Multilateralism starts from our own homes and in our own minds,” she said, adding that “it must be our daily routine”.