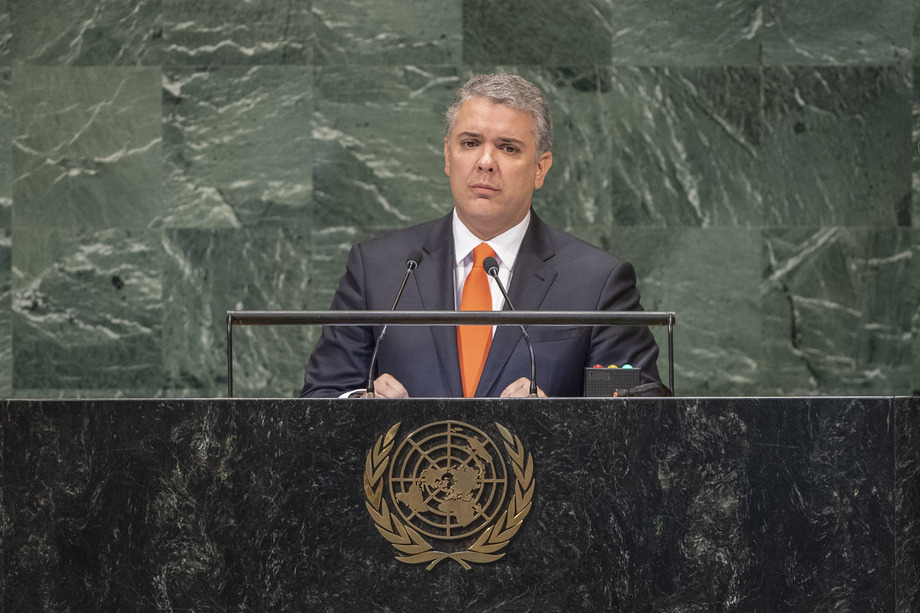 IVÁN DUQUE MÁRQUEZ, President of Colombia, describing himself as part of a new generation of Colombians, said that his country today was uniting around shared objectives.  Such efforts, which have earned the respect of the world and international investment, are building a path of progress with democratic institutions.  Economic growth is being maintained in the midst of complex regional volatilities, with cities transforming into productive sectors and the middle class expanding.  While rising to the challenges of globalization the Government is also focusing on social justice and bridging social gaps.  Towards that end, a plan is being developed to achieve the Sustainable Development Goals by 2030.

Stressing that peace requires the rule of law, he said his Government will work towards completing the disarmament and reinsertion process that began some years back.  The peace process his Government inherited was fragile due to a lack of funds and the complex and dispersed institutional architecture, but Colombia will fulfill its commitment vis‑à‑vis those who chose to turn away from violence. Financial support of the international community will ensure that goal.  The law will be enforced in an exemplary manner, he stated, adding that those who mock the victims and the generosity of the Colombian people will feel the full weight of justice.

“For peace to shine in Columbia, we must overturn drug trafficking,” he said. Noting that the recent incremental trafficking increase has become a fuel for organized crime, he expressed his will to break up the transnational crime networks.  Acknowledging that prevention is critical from a public health approach, he also stressed that the drug traffickers were predators.  Recently, his Government joined the global call to action on the world drug problem, recognizing that all countries must contribute.  “We will not accept as our destiny the addiction of so many youth,” he stated.

He also stressed the importance of tackling corruption in a determined manner, as it is threat to democracy, social values and institutions.  “From the first day of our Government, we presented measures before Congress”, launching an ambitious initiative supported nationwide.  He also called for the international community to strengthen the sanction instruments and mechanisms to fight transnational corruption.  No efforts should be spared to expedite the judiciary processes and sanctions in that regard.

Drawing attention to the situation of Venezuelans fleeing their country, he stressed that Colombia has opened its doors to close to a million of them.  The humanitarian crisis in the region was caused by a “dictatorship that annihilates liberties”, he said.  The international community must immediately demand the liberation of political prisoners, he continued, calling for the use of all international mechanisms to denounce, investigate and sanction those responsible for that situation.