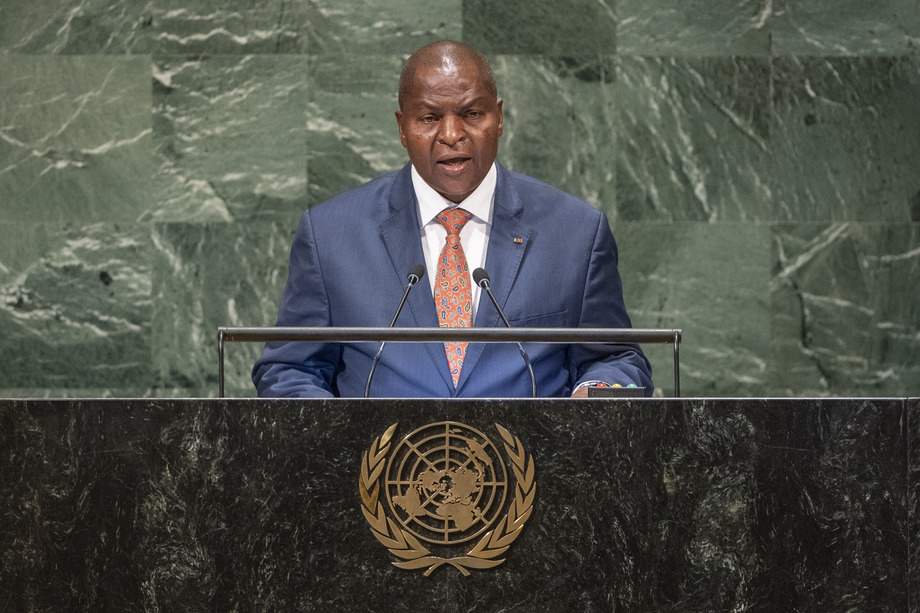 FAUSTIN ARCHANGE TOUADERA, President of the Central African Republic, said that at a time when the United Nations is undergoing broad reforms and the world is facing ever more complex challenges, from violent extremism to economic inequalities, the Organization has a central role to play in maintaining peace and security worldwide.  Global leadership must provide the necessary tools for an efficient response.  Supporting the African Union’s position, he said the continent must be fully represented in all United Nations organs, particularly the Security Council, which should eliminate veto power for its permanent members and allocate a permanent seat to an African nation.

On the global threats of terrorism and violent extremism, he said his country and region have not escaped some of the consequences, including the unravelling of social cohesion, rampant violence, humanitarian crises and the destruction of development efforts.  Africa has showed its unity in combating those scourges, working together in a holistic, coherent manner that contributes to development.  That is the best way to prevent and combat those threats, he said, emphasizing the significance of tailored responses adapted to unique environments.

Turning to challenges ahead, he said that when migration is managed well, the phenomenon can have positive development effects for nations of origin and significant gains for countries of destination.  Managed poorly, migration also has grave consequences for the well-being of countries and migrants, coupled with risks of destabilizing national and regional security, he said, commending the forthcoming intergovernmental conference to adopt the Global Compact for Safe, Orderly and Regular Migration.  On climate change challenges, he encouraged all States to work together towards reaching sustainable development targets.

Sharing national achievements, he said efforts are under way to boost State and social services in provinces nationwide.  Regretting to note the persistence of armed groups aimed at fuelling violence across the Central African Republic, he said the Government has maintained its security and defence sectors, including the deployment of armed forces and the national disarmament, demobilization and reintegration programme.  Commending MINUSCA and partners for their support, he asked for a lifting of the arms embargo, which is hampering the development of military forces.  Citing further gains, he said efforts have also aimed at combating impunity, including the establishment of the new special penal court and the truth and reconciliation commission.

Today, the Government and people of the Central African Republic are resolutely engaging in consolidating democratic processes and economic growth, he said.  Despite challenges, his country remains determined in its efforts, he said, pledging to spare no effort to create conditions for reconciliation and reconstruction.  Thanking partners and the international community for their support, he expressed hope that they will remain committed to working with the Central African Republic to ensure further progress in his country’s recovery.