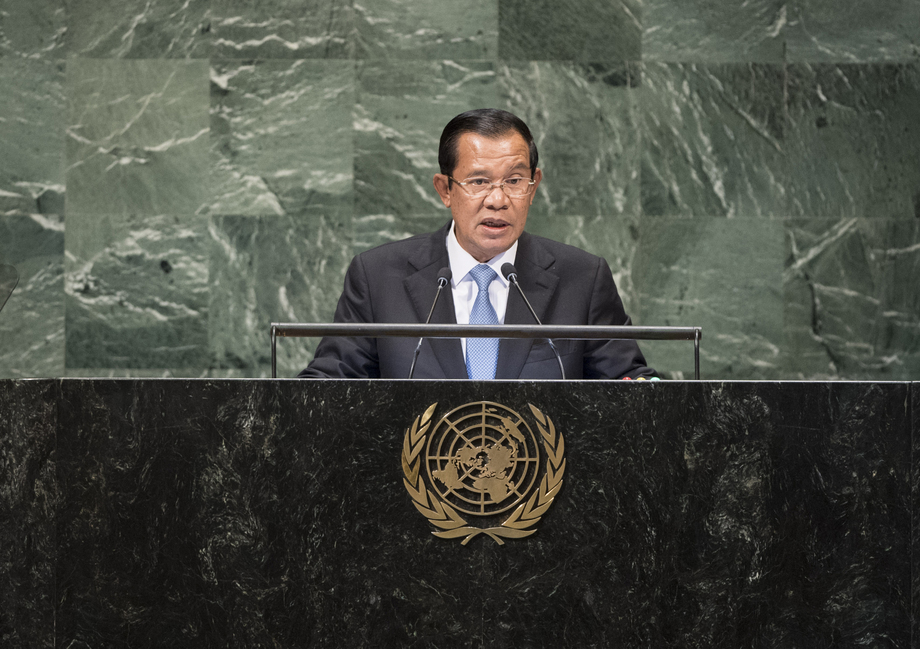 SAMDECH AKKA MOHA SENA PADEI TECHO HUN SEN, Prime Minister of Cambodia, said his country was a clear example of the successful transition from war to peace, adding that the country was enjoying the dividends of stability and rapid development.  Previously infamous for its killing fields, Cambodia is now a peaceful tourist destination and is recognized as one of the world’s fastest growing economies.  The country is governed by the rule of law and respect for multiparty, liberal democratic principles.  In July, nearly 7 million Cambodians freely cast their vote to determine their political future.  Twenty political parties participated in the election which clearly demonstrated legitimate representation of pluralistic politics.  The legitimate results of the election are not subject to question or debate, he said, adding that external ambitions to interfere in the electoral process are an assault on the will of Cambodians.

Drawing attention to the vitality of the United Nations Charter, he said it was crucial to avoid interfering in, damaging or disrupting the sovereignty of independent States.  He voiced regret that human rights have become a mission to impose specific politics and a pretext for interference by powerful nations.  As a result, sanctions have become a popular weapon among certain States.  Big countries must not attempt to install their administrative system on small countries because those small countries also possess sovereignty and legitimate aspirations.

He voiced deep concern over tensions resulting from the actions of a “first world super-Power” and over that State’s brash decision to withdraw from international mechanisms, adding that such actions undermine State‑to‑State relations.  In an interconnected world, reverting to protectionism effectively closes the door on trade and investment, two paths to prosperity.  Unilateralism will make all countries poorer and render them unable to implement the Sustainable Development goals, he said.  With a small economy, he said that Cambodia believes in the benefits of rules‑based international cooperation, adding that global trade must not be hindered through the imposition of tariffs.  Together, States must maintain and strengthen the principle of multilateralism.

Peace without development is not sustainable, he assured, adding that the Sustainable Development Goals can guide the world towards prosperity.  The Goals are an important opportunity to mobilize efforts to reduce poverty and promote inclusive development.  The Cambodia Sustainable Development Goals will soon be approved and that will guide medium‑ and long‑term policymaking.  Conflict prevention is also a precondition for long‑lasting peace, he said, noting that United Nations peacekeeping efforts play a vital role in global peace efforts.  Cambodia welcomes the Secretary‑General’s vision for the Organization’s peacebuilding and peacekeeping initiatives and his focus on conflict prevention.

Terrorism represents a severe and complicated threat and a barrier to long‑lasting peace, he said.  Terrorist groups disintegrate communities, worsen conflict and weaken the stability of whole regions.  As terrorists turn to cyberspace, counter‑terrorism efforts are forced to become more complex and go through modernization efforts.  The cross‑border nature of terrorism requires States to foster concerted cooperation initiatives that include preventive measures.  Climate change is another threat standing in the way of implementation of the 2030 Agenda.  He pointed to the Paris Agreement as the foundation for action on climate change and asserted Cambodia’s commitment to participate in climate‑related mechanisms.  Cambodia fully supports United Nations global leadership and commits itself to implementing its shared responsibility to build a peaceful and equitable world, he stated.