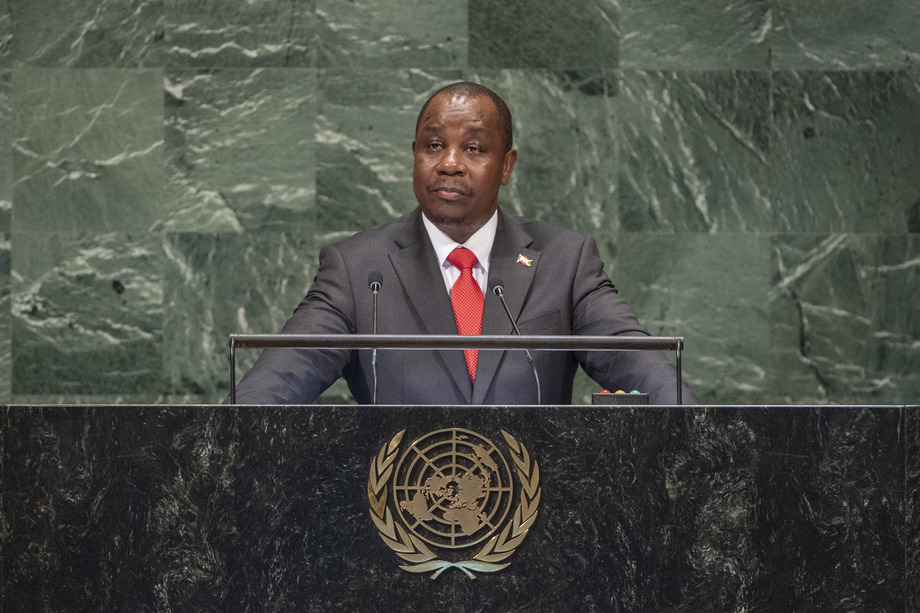 EZÉCHIEL NIBIGIRA, Minister for Foreign Affairs and International Cooperation of Burundi, drew attention to his country’s new Constitution — which was put to a peaceful referendum on 17 May — and its President’s pledge to complete his second mandate in 2020 and support his elected successor.  Contrary to what others have stated about the President trying to hold power until 2034, his promise to stand down sets a praiseworthy example.  At the same time, a spirit of tolerance and transparency, as well as the openness of the political space, has seen the return of both refugees and exiled political leaders to Burundi as well as the release of more than 2,000 prisoners at the start of the year.

He reviewed the progress being made in the ongoing inter‑Burundian dialogue, saying that those asking the country to promote dialogue are pushing on an open door.  In August, a meeting of all political parties culminated in a road map towards free, inclusive and peaceful elections in 2020.  A national independent electoral commission has been set up and, this month, the former President of the United Republic of Tanzania and facilitator of the inter‑Burundian dialogue sent a team to consult with all stakeholders ahead of a fifth and final round of talks.

On the security front, he emphasized that, apart from a few instances of crime, the situation in Burundi is calm, stable and entirely under control — an assessment shared by the Special Envoy of the Secretary‑General as well as the Security Council through its press statement of 22 August.  The return to normality enabled Burundi to organize the Constitutional referendum as well as host several conferences and visits by eminent persons.  He called on the Office of the United Nations High Commissioner for Refugees (UNHCR) to intervene with those countries putting up obstacles to the return of Burundian refugees.

He went on to say that Burundi stands ready to work with the United Nations and other nations to promote human rights based on mutually respectful cooperation.  Those who want to turn the Human Rights Council into a political tool risk compromising the goals set out by Member States when that Council was created, he said, adding that the withdrawal of some countries should be viewed as a disavowal of the way it is being used by a minority of States.  Noting the participation of Burundian troops in United Nations peacekeeping operations, he said Burundi is far from being a threat to international peace and security and called on the Security Council to have the courage to remove it from its agenda.  Burundi’s rightful place is not in the Council agenda, but with those United Nations agencies tasked with social and economic development, he said.