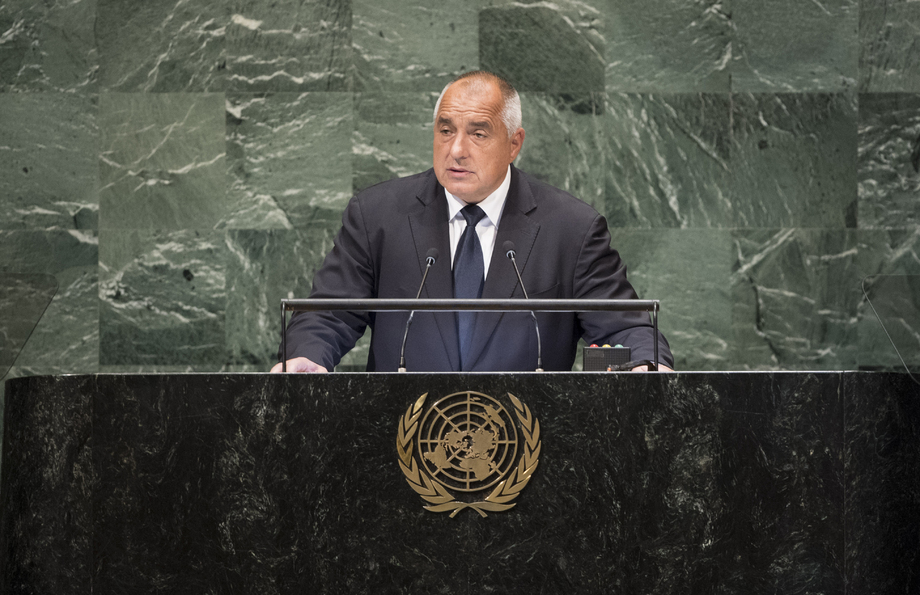 BOYKO BORISSOV, Prime Minister of Bulgaria, stressing the central role of the United Nations in sustaining a world order based on rule of law, underscored that every country, large or small, has the responsibility to make a significant contribution towards security and prosperity in its own region.  That was exemplified by his country’s commitment to fighting the global drug problem which had led it to co‑host the recent high‑level event on that topic.  Further, the Bulgarian Presidency of the Council of the European Union invested considerable efforts to achieve progress and consensus among Member States, and during its tenure, the European Union adopted the mandate to start negotiations for the signing of a new partnership agreement with 79 countries from Africa, the Caribbean and the Pacific.

Highlighting some of the “idiosyncrasies” of his region, he said that the 100th anniversary of the end of the First World War was a reminder of the importance of the Balkans and how they had often been the source of conflicts, the embers of some which were still burning.  In spite of all the obstacles before them, the countries of the South‑Eastern Europe and especially those from the Western Balkans have managed to achieve remarkable progress on much‑debated issues.  As compelling proof of that, he pointed to the recent signing of the agreements between Sofia and Skopje, and between Athens and Skopje.  These agreements are crucial steps towards stability and security in South‑Eastern Europe, as well as towards the Euro‑Atlantic prospects of the western Balkans.

Further, he said, Bulgaria, during its tenure in the Presidency of the Council of the European Union initiated a process that put the western Balkans back on the agenda of European politics.  An important and emblematic expression of this process was the Leaders’ Summit of the member States of the Union and the western Balkan countries in Sofia in May.  Connectivity in all its dimensions was the focus of the discussions, as well as the joint response of the young and relatively small Balkan states, to the common challenges faced by the international community, including irregular migration, organized crime and terrorism, hybrid threats and cybersecurity issues.

Turning to migration, he added that the refugee crises are a consequence of a myriad of political and socioeconomic factors.  Strengthening cooperation with all countries of origin, transit and destination is crucial and it is necessary to fully guarantee human rights and the sovereign rights of States to secure their borders.  The international community must pay special attention to the different dimensions of development and the integral link between development and security.  “If we do not back these efforts with active mediation and peacekeeping, and if we do not manage to resolve burning conflicts and prevent future ones, chances of success are doomed,” he cautioned.

Noting that this year marked the 70th anniversary of the adoption of the Universal Declaration of Human Rights, he added that his country will be presenting its candidacy for membership in the Human Rights Council.  This is not an end in itself, he stressed, but an expression of Bulgaria’s consistent policy of protection of human rights in the country and at the global level.  Seventy-five years ago, in the darkest years of the Second World War, Bulgaria’s citizens, the church, enlightened leaders and intellectuals stood up to the attempts to deport close to 50,000 Bulgarian Jews to the death camps.  That moment, he emphasized, carries a strong message relevant to the present moment and all people who feel threatened, he said, adding that it was his country’s mission to not allow the return of xenophobia.