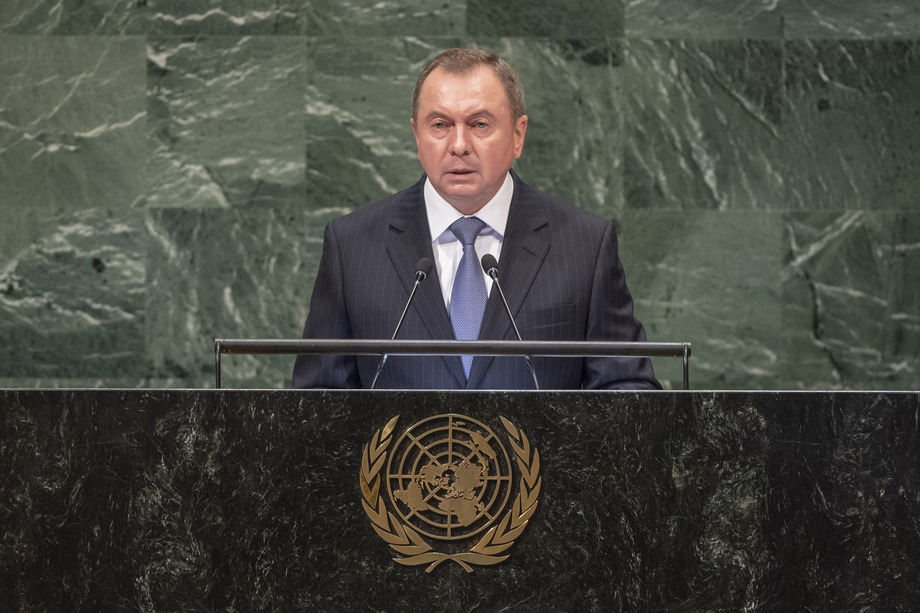 VLADIMIR MAKEI, Minister for Foreign Relations of Belarus, pointing to the endorsement of the 2030 Agenda for Sustainable Development and the Paris Agreement on climate change, said the international community will soon green light two instruments that will inspire hope for change:  the Global Compact for Safe, Orderly and Regular Migration and the Global Compact on Refugees.  The implementation of these initiatives will ensure that globalization is equitable.  Because the search for answers to global challenges clearly shows no country can act alone, the United Nations must continue to act as an efficient tool for multilateral cooperation.  Further, achieving the goals of the 2030 Agenda requires effective United Nations country teams, he said.

Pursuing globalization for the common good is a key objective that faces geopolitical and geo-economics fault lines, he continued.  A “civilizational trap” is emerging that fosters confrontation.  Belarus, located at the heart of Europe, is squeezed between two geopolitical power centres; conflict in Ukraine impacts its economic development.  His country is heavily dependent on external markets and supports a fair international trade architecture.  His Government is particularly interested in cooperation between the Eurasia Economic Union and European Union, he said, pointing to national approaches that foster integration and economic growth.  In addition, development that leaves nobody behind requires support for middle‑income countries, home to 5 billion people and 75 per cent of the world’s poor.  It is unfair that progress in development is gauged exclusively based on per capita income.

Humanity is entering a new era as digital technology drastically transforms lives, he noted.  Belarus is pursuing policies that will transform it into a leading information technology country.  Digital technologies are “rocket fuel” for economic development and improve education and stimulate business activity.  However, digital markets will affect labour markets and countries will have to adapt their economies to the looming changes.  The United Nations should establish international cooperation networks on digitization and sustainable development so that countries can find their own niche.  Capacity building in this field is impossible without basing such efforts on principles of sustainability and prosperity.

True sustainability cannot be maintained without security, he underscored, welcoming United Nations efforts to mount a common front against terrorism.  Belarus will convene a high‑level meeting on combating terrorism in the context of a digitizing world.  The world faces unprecedented threats and challenges that could lead to a new Cold War.  These threats point to a crisis in international diplomacy and divergent views among certain countries.  The United Nations is becoming a stage for confrontation.  Stability means ending geopolitical chaos while respecting State sovereignty and non‑interference in the affairs of other nations.  Only strong States can support security and the safety of their populations, he said, adding that Belarus is promoting dialogue to pursue peace and stability between Euro‑Atlantic and Eurasian States.  Reflecting on whether one day or one meeting can change history, he cited the great Indian leader Jawaharlal Nehru who called this moment a "tryst with destiny".  “The common task lying before us is to increase the number of such moments,” he said.