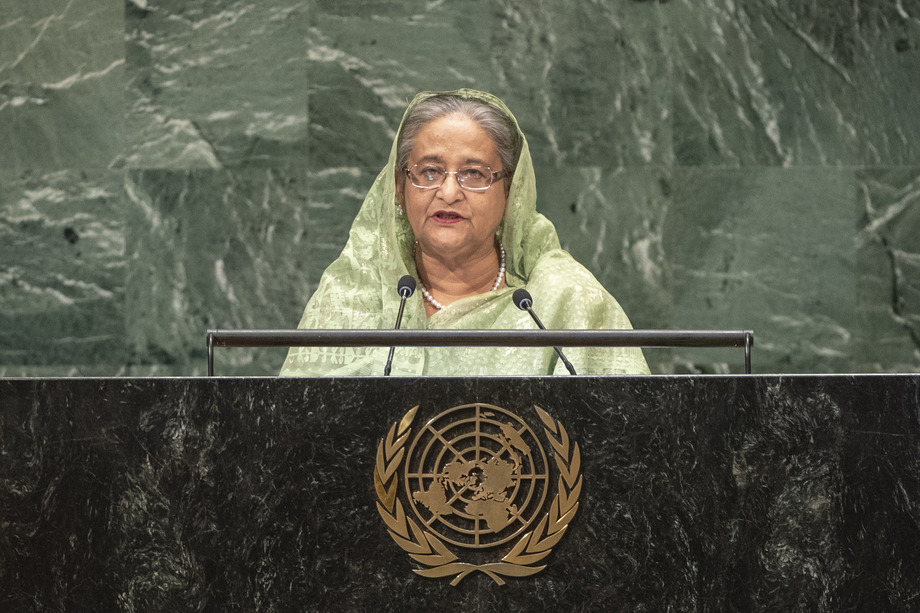 SHEIKH HASINA, Prime Minister of Bangladesh, recalled her father’s work to improve his country’s socioeconomic development at a time when 90 per cent of its population lived below the poverty line.  In 1975, he was assassinated along with 18 other members of her family, and she — who was abroad at the time — was barred from re‑entering Bangladesh.  A military dictator took power and her family was denied the right to seek justice for the gruesome murders.  “I can feel the pain and suffering of countless people around the world, persecuted and expelled from their homes like the Rohingya,” she said.  Indeed, the situation in neighbouring Myanmar is a reminder of the genocide committed by Pakistani occupying forces against the people of Bangladesh in 1971.

Emphasizing that her Government is appalled by recent United Nations reports about the atrocities committed against the Rohingya population – which are also tantamount to genocide and crimes against humanity – she voiced the expectation that the international community, and particularly the United Nations, give due importance to that population.  Having lived abroad as a refugee herself, she expressed the pain and misery of losing one’s loved ones and of living in a different land.  For those reasons, she presented to the Assembly in 2017 a five‑point proposal aimed at finding a durable, peaceful solution to the suffering of the forcibly displaced Rohingya.  “We are disappointed that despite our earnest efforts, we have not been able to begin a Rohingya repatriation in a permanent and sustainable manner.”

Outlining Bangladesh’s attempts to reach a peaceful solution to the crisis as well as its support for the 1.1 million refugees that fled into the country, she said the Government is building a new housing facility including arrangements for education, health care and other needs.  Calling on international organizations to join in those initiatives - as well as to help relocate the Rohingya to the facility – she went on describe Bangladesh’s deployment of over 158,000 peacekeepers in 54 United Nations missions.  In addition, as its original proponent, Bangladesh supports a more robust and human rights–centric Global Compact on Safe, Regular and Orderly Migration.

Reiterating Bangladesh’s firm commitment to stand against terrorism and all organized crime, she said it will not allow its territory to be used for any such acts.  Indeed, the country maintains a zero‑tolerance policy in countering terrorism and a “whole of society” approach to preventing violent extremism, human trafficking and the flow of illicit drugs.  Aligning herself with the Global Call to Action on the World Drug Problem led by the United States, she went on to describe Bangladesh’s overall inclusive, people‑centric development policies.  She also outlined its rising GDP, its increasing use of renewable energy and its peaceful use of nuclear energy.

“Bangladesh is now recognized as a global development model,” she said, noting that it has begun its journey from a least developed country to a developing country.  That path will be inextricably linked with its implementation of the Sustainable Development Goals, which is integrated in its seventh Five Year Plan.  She also spotlighted “immense and large‑scale” business opportunities — noting that foreign investors are being offered various financial incentives to do business in Bangladesh — and its success in boosting school enrolment rates, improving women’s participation in Government, reducing child and maternal mortality, bringing sanitation to 99 per cent of its people and delivering safe drinking water to 88 per cent.