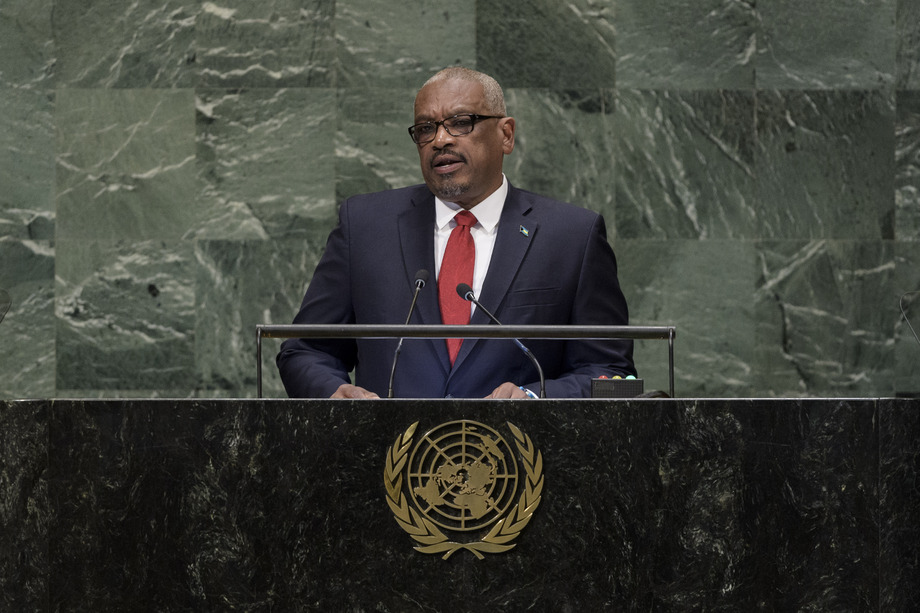 HUBERT ALEXANDER MINNIS, Prime Minister of the Bahamas, said that although the United Nations is unquestionably relevant to the global community, it is imperative to strive to achieve more.  Climate change is a clear and present danger to all, but especially low‑lying coastal nations like the Bahamas, as witnessed in rising sea levels, loss of coral reefs, increased ocean acid volume and more severe, frequent hurricanes and typhoons.

He recalled that his Government evacuated residents from southern islands to prevent loss of lives as Hurricane Irma approached.  While there were no fatalities in the Bahamas, “our southern neighbours were not as fortunate”, and he therefore fully supports the Secretary‑General’s plan for a Climate Summit next year.  Such discussions must generate more energy and resources to build the resilience and sustainability of island and coastal nations.  He said the consecutive damage of major hurricanes has made it difficult to rebuild the Bahamas, an archipelago stretching some 600 miles from north to south, requiring them to replicate infrastructure many times with limited resources.  While delivering humanitarian aid is essential, so is a comprehensive approach to sustainable development to address disaster risk reduction and the viability of seas and oceans for posterity.

Tourism is the world’s largest industry and the lifeblood of the Bahamian economy, he said, with millions of annual visitors.  To protect its waters and biodiversity, the Bahamas will ban single‑use plastics by 2020.  Looking forward to the successful review of the Samoa Pathway, he will also advocate an international legally binding instrument under the United Nations Convention on the Law of the Sea, on the Conservation and Sustainable Use of Marine Biological Diversity of Areas Beyond National Jurisdiction.

He noted that the Bahamas and its neighbours are “being beaten twice”:  while island nations are not primarily responsible for the climate change which results in hurricanes, when they borrow internationally to restore basic human infrastructure, their debt‑to‑gross domestic product (GDP) ratio rises.  Calling for the United Nations to facilitate international dialogue for a workable solution, he also pointed to “the distorted matrix of GDP per capita as a measurement of national wealth and viability” that causes the Bahamas to be assessed more favourably than it should for contributions to international organizations, and when international aid is needed when disaster strikes.  Further afield, he reaffirmed support for Cuba to access resources to rebuild after disasters.  Highlighting an uphill battle to avoid blacklisting as a non‑cooperative jurisdiction for tax purposes, he stated the country remains committed to international tax transparency and cooperation, regulatory standards and doing business in a fair, competitive manner.

In keeping with the Sustainable Development Goals, his Government seeks to revitalize urban centres with economic and poverty alleviation initiatives.  As a member of the Council of the International Maritime Organization (IMO), the Bahamas has presented candidature for re‑election to Category “C” and intends to continue working for safe and secure shipping and preventing marine pollution by maritime vessels.  Although the Bahamas’ geographical location has made it particularly vulnerable to illegal migration, he stated the country will continue to fight it while adhering to human rights principles.