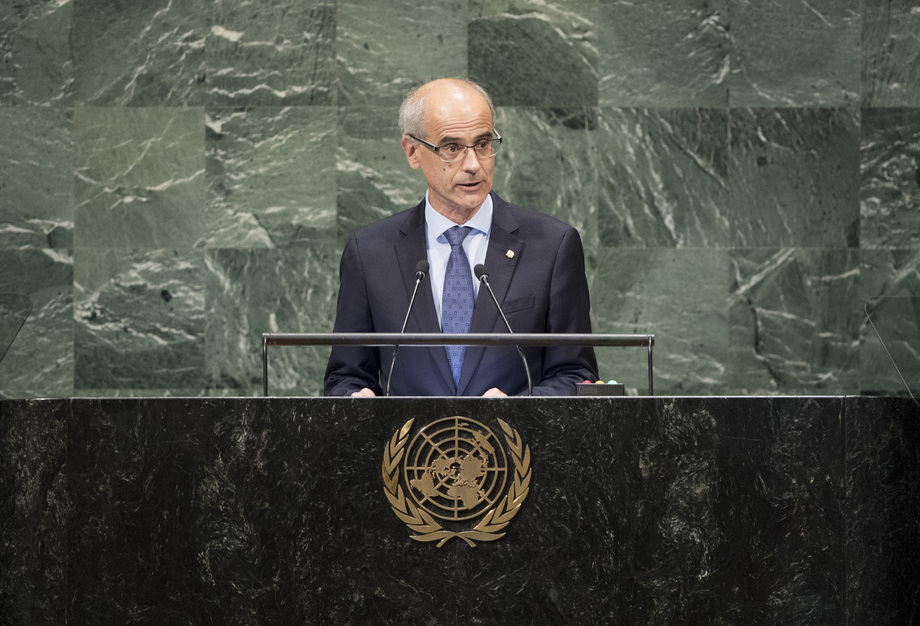 ANTONI MARTÍ PETIT, Prime Minister of Andorra, said that 25 years ago, when his country joined the United Nations as a full member, it was a time of hope for everyone.  The fall of the Iron Curtain and the end of the cold war gave way to a wave of unprecedented democratization.  Human rights were consolidated, economies grew and inequalities were gradually reduced.  Twenty‑five years later, many of the hopes of that time have become blurred.  Freedom House has noted a constant decline in world democracy since 2006.  In its last report it noted that in 2017, only 4 out of every 10 people live in free countries.

This slow decline in democratic regimes has been accompanied by an increase in inequality, intolerance and extremism, he continued.  However, despite all the deceptions and faults, the international order should be defended because it is an order that is based on principles that are as elemental as they are universal.  Representative democracy and multilateralism are the result of common values and it is therefore not surprising that they are facing a crisis at the same time and being threatened by populism and technocracy.  In the face of complex problems, populism proposes solutions that are not really solutions because they end up creating new problems and questioning democratic principles and values.  Technocracy, in the face of complex problems, proposes solutions that are as complex as they are elitist.

The actions of the United Nations must be inclusive and focused on the real problems of people, he said.  This is why his country wants to participate in an active way in promoting and achieving the Sustainable Development Goals.  These objectives are focused on specific, tangible needs of the world population.  They are large, global objectives that have local applications.  If they are reached they will reinforce the bonds that are necessary between people and institutions.  Andorra presented its first Voluntary National Review at the High‑Level Political Forum in July.  Its Government has set up a campaign to involve the education community, civil society and private companies in the promotion and achievement of the various goals.

Andorra has also focused on measures to combat climate change, and support quality education, he said.  Insisting that the international community comply with the agreements and commitments made in Paris in December 2015, he added that his Government is working to fulfil the commitments of the Paris Agreement.  As far as quality education is concerned, Andorra is proud of having a rich, diverse and integrated education system that is available to all citizens.  It is a system in which families can opt for Andorran, Spanish or French education and one which prepares the nation’s young people to become citizens of a global world.

The United Nations cannot afford the luxury of disconnecting from the problems, needs, expectations and hopes of the citizens of this globalized world, he said.  Andorra offers support to the plans to reform the architecture of the United Nations that are being carried out by the United Nations Secretary‑General and his team.  A more efficient management of resources is highly necessary, particularly management that is focused on people.