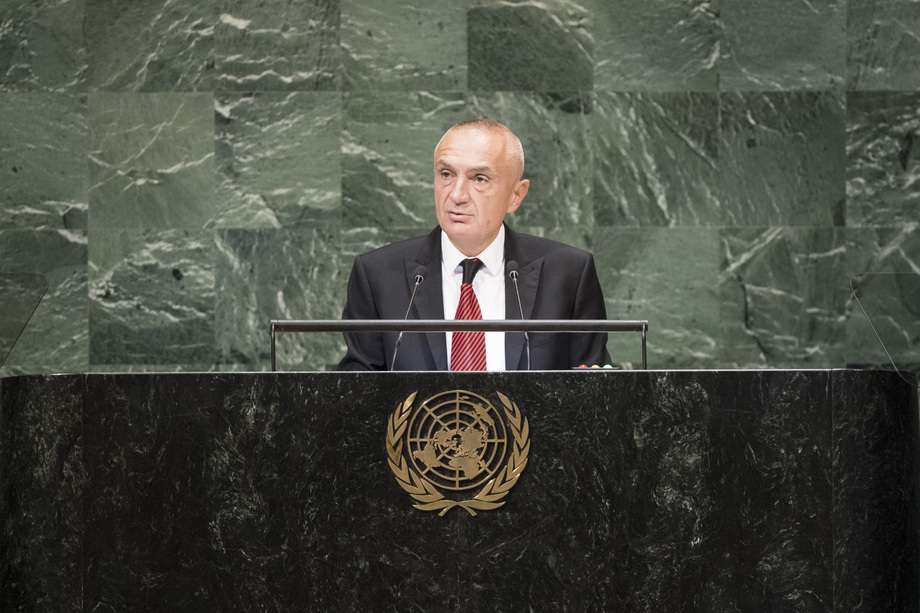 ILIR META, President of Albania, acknowledging the need for reform in the Organization, emphasized that his country remains faithful to the fundamental principles of the United Nations.  Underscoring that the 2030 Agenda for Sustainable Development is relevant and applicable in all countries, he said the Albanian Parliament has unanimously expressed its firm commitment to achieving the Sustainable Development Goals.  Those Goals and Albania’s European agenda are compatible and coherent with its European integration project.  Further, Albania’s development and integration strategies rest on the principles of good governance, rule of law, a competitive and sustainable economy, and the promotion and respect of human rights and fundamental freedoms.

Regarding the ongoing peace and integration processes in the Balkans, he said every bilateral achievement among countries of that region contributes directly to increasing peace, security, stability and economic development.  The recently concluded agreement between Greece and the former Yugoslav Republic of Macedonia has the potential to become an historic achievement.  He urged all political actors in the latter country — including local Albanian leaders — to remain actively engaged by supporting a vote in favour of the agreement on the 30 September referendum.  Emphasizing the importance of the North Atlantic Treaty Organization’s (NATO) open door policy towards the Western Balkans, he said the positive momentum in the region could nurture further progress in the European Union‑led dialogue between Kosovo and Serbia.  It is of paramount importance that this agreement fosters the European values of interethnic co‑existence and harmony.

The history of the Balkans is notoriously linked to border changes, ethnic cleansing and violent massive displacements, he recalled.  Yet, in the last two decades, the region has undergone a tremendous transformation thanks to the United Nations support and involvement, and the serious political, social and economic investments of the United States and the European Union.  He said his country welcomes and encourages every effort of the United Nations Member States in continuing Kosovo’s international recognition and its membership in regional and international organizations.  Noting the stability and positive development in that country, he expressed support for a reduction of the sessions held by the Security Council on the United Nations Interim Administration Mission in Kosovo (UNMIK) reports.

He went on to express support for the Security Council resolution 2242 (2015) and a more integrated peace and security architecture, adding his vote of confidence that Secretary‑General Guterres will be able to continue working towards revitalizing the Organization’s role with a focus on peace and security.  Underlining that more than 6,500 members of the Albanian Armed Forces and civilians have participated in international peacekeeping operations since 1996, he reaffirmed his country’s pledge to continue its modest but firm contribution.  He expressed deep appreciation for the close cooperation between the United Nations and the European Union on the platform of the Common Security and Defense Policy and welcomed the leadership of the United States on the denuclearization of the Korean peninsula, describing it as “a very positive step forward not only for that region but for the entire planet as well”.

However, the situation in Syria and Libya are concerning, he said, emphasizing that the crisis in Libya can only be resolved through an inclusive political dialogue between the two parties.  He reiterated his country’s support for the Global Call to Action on the World Drug Problem initiated by the United States.  Reaffirming its strong belief in multilateralism, he said Albania would seek to serve as a non‑permanent member of the Security Council for the 2022‑2023 term, adding that his country stands ready to engage constructively in conflict prevention and peace operations through the United Nations and other regional organizations.