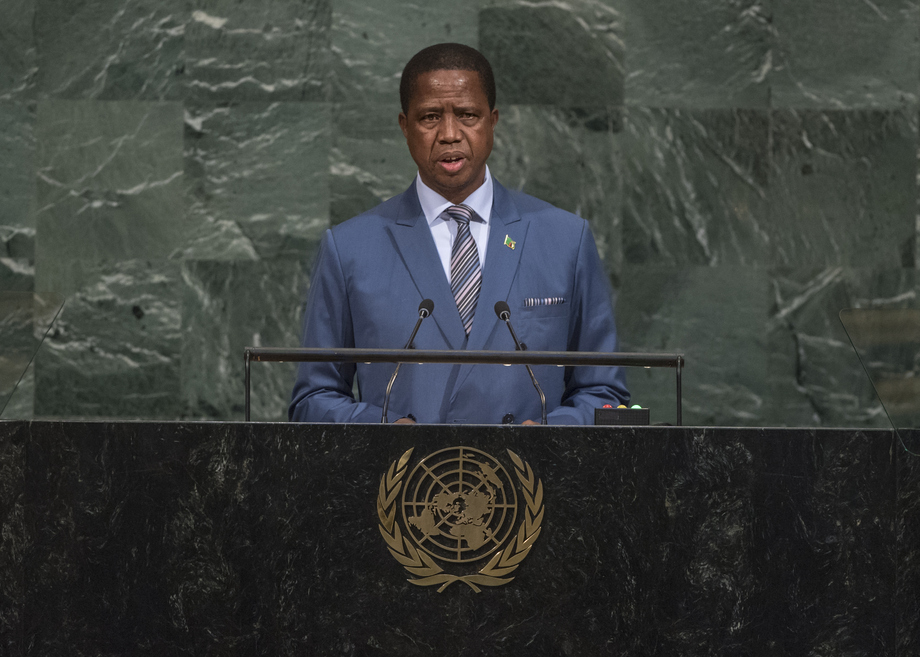 EDGAR CHAGWA LUNGU, President of Zambia, said the theme for the Assembly’s session presented an opportunity to evaluate multilateral approaches to the challenges affecting the world’s peoples.  Those included threats to socioeconomic development and international peace and security, as well as those posed by terrorism, climate change, nuclear weapons, HIV/AIDS and more.  “In this globalized and interdependent world, no country — however wealthy or powerful — can resolve all these challenges singlehandedly,” he stressed, calling for common solutions from a strong United Nations.

He said the effects of climate change were also frustrating efforts to raise living standards for the world’s poor and meet the Sustainable Development Goals.  He expressed hope that, at the twenty-third Conference of States Parties to the United Nations Framework Convention on Climate Change, countries would establish mechanisms to implement the Paris Agreement, and that stakeholders would ensure the Green Climate Fund was adequately funded.  As a developing country, Zambia required assistance to enhance its adaptive capacities in areas such as scientific research, early warning and rapid response to address the adverse impacts of climate change, as well as the appropriate technologies to do so.

Underlining Zambia’s commitment to fostering an all-inclusive development paradigm based on the 2030 Agenda and the African Union’s Agenda 2063, he recalled the recent launch of the seventh national development plan under the theme “accelerating development efforts towards the attainment of the national vision 2030 without leaving anyone behind”.  That plan sought to improve productivity in agriculture and create opportunities for unskilled wage improvement in sectors such as manufacturing.  It would pay particular attention to uplifting living standards in rural areas and place a new focus on “agro-value addition”, while aiming to reduce poverty.  In keeping with the Addis Ababa Action Agenda on Financing for Development, Zambia would mobilize and use all sources of finance — whether locally mobilized or through internal cooperating partners — for the benefit of its citizens.

Pledging solidarity with those nations working to deepen their democracies, he recalled that several countries — including in Africa — had held national elections since the Assembly’s last general debate.  “This is the Africa we want for the twenty-first century and, indeed, the future we want,” he said.  Zambia continued to support those still affected by conflict through its membership in the African Union Peace and Security Council, and looked forward to a successful tenure in the Southern African Development Community (SADC) Troika on Politics, Defence and Security.  Zambia also continued to serve in peacekeeping operations, he said, calling on the United Nations not to “relent on its duty” to vulnerable people around the world, but rather to redouble its efforts.

Stressing that such actions should go further to seek the protection of victims of conflict — including displaced persons — he underscored the need to cooperate in providing a conducive environment in full respect for human rights, social development and well-being.  Zambia had a particular focus on women, children and youth, he said, recalling that it had engaged traditional leaders to reform traditions and customs allowing child marriage.  Indeed, as the designated African Union champion on ending child marriage for 2017, he announced the launch of a related campaign in 20 countries out of the 30 in Africa with the highest prevalence of child marriage.  On the issue of United Nations reform, he said such a process would not be complete without meaningful reform of the Security Council, which must become more representative, democratic and accountable to all Member States, irrespective of status.  As Africa constituted the second‑largest bloc of the United Nations membership, reform proposals should “heed Africa’s legitimate call” and “move away from the deliberate attempts to create a maze of an otherwise clear question”.