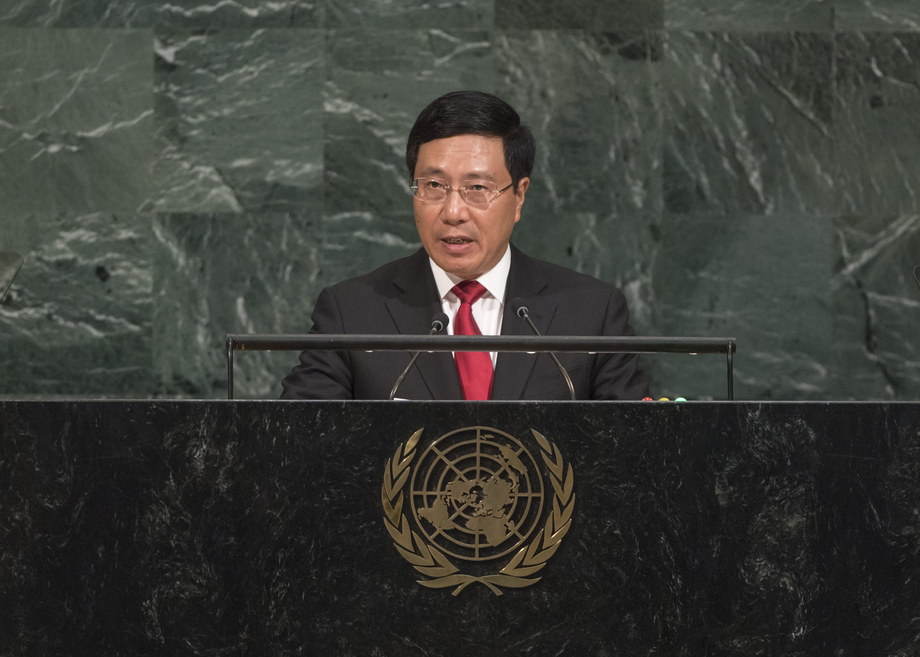 PHAM BINH MINH, Minister for Foreign Affairs of Viet Nam, said that, since Viet Nam was admitted to the United Nations 40 years ago, it had become a dynamic economy on the path of reform and sustainable development, transforming from an aid-dependent country to a lower-middle income one.  Its Millennium Development Goal efforts had lifted tens of millions out of poverty.  With the adoption of the 2030 Agenda, the world community had chosen sustainable development as the path towards a better destiny for today and for future generations, he said.  That ambitious plan should now become a reality.  Developing countries should be given more favourable conditions and resources to realize the Sustainable Development Goals, he said, and developed nations should fulfil their commitments to provide financial assistance and technology to developing countries.

Sustaining peace should always be the top priority, he said.  For current global challenges, multilateralism had provided the most effective solutions.  Multilateral institutions were venues for countries to align their own interests, manage disputes and promote cooperation, but trust would falter if those institutions failed to prove their effectiveness.  Global and regional multilateral mechanisms should function in a transparent, effective and responsive manner.  The United Nations should be at the centre of coordination to address global challenges, and build an ever more comprehensive system of rules and norms with a mechanism for ensuring fairness and equality.  To do so, the Organization should carry out a comprehensive reform.

Concrete actions needed to be taken to prevent conflicts, build confidence and peacefully settle conflicts, including those in the Middle East and Africa, he said, and to call for the denuclearization of the Korean Peninsula.  In the same vein, he said that the unilateral embargo against Cuba was inappropriate and he called for its immediate removal.  He welcomed the recent adoption of the Treaty on the Prohibition of Nuclear Weapons and called upon others to sign and ratify it.