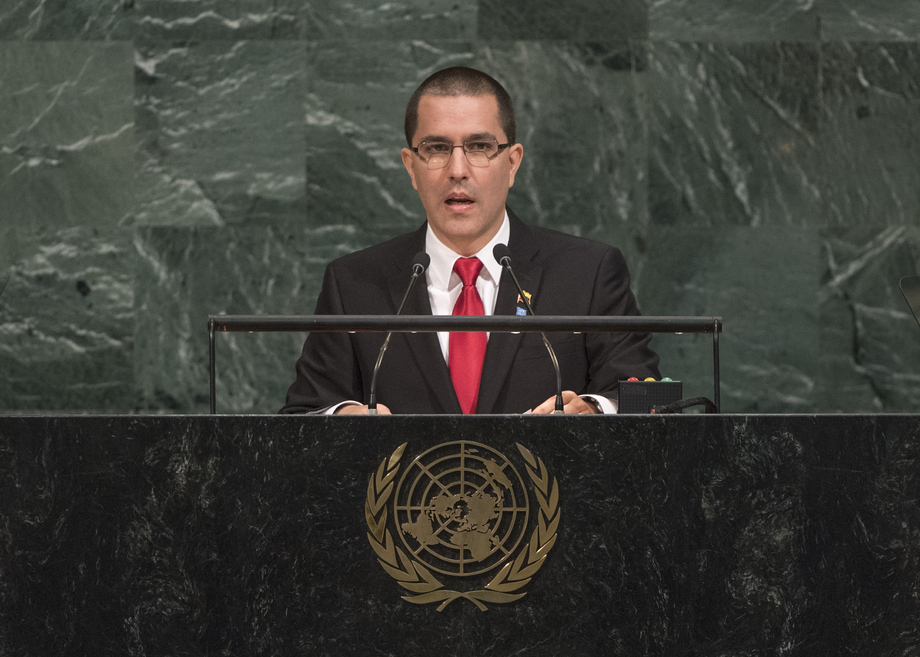 JORGE ARREAZA, Minister for Foreign Affairs of Venezuela, said that while the General Assembly was “the home of peace”, its podium — a sacred space for people who worked for global understanding and equality — had last week been defamed by the representative of a Power intent on imposing its rules of war, suffering and pain on other nations.  As Venezuela’s former President Hugo Chávez had famously said in 2006, “the stink of sulphur” was in the air at the podium, and “this is still the case”.  Severe unilateral threats to peace and security remained, with President Donald J. Trump of the United States having threatened war and the total destruction of another Member State, judging “as if he was emperor”.  In a paradoxical gesture of brazenness and hypocrisy, he had claimed those words were based on the principles of peace and sovereignty.  Venezuela’s own people had been directly threatened by President Trump, including by military threats and the imposition of unilateral sanctions intended to make its people suffer and achieve a change in Government.  While Venezuela would always deal with the United States and other nations through mutual respect, it was nevertheless prepared to defend itself “in any way”.

Urging the United States to “neutralize its bellicose pretentions” and reverse its threats to multilateralism, he recalled that, in March, the Non‑Aligned Movement had condemned the imposition of unilateral coercive measures by some States in flagrant violation of the United Nations Charter.  Indeed, Member States must respond to those illegal actions through solidarity.  He condemned all such actions against Iran and the Russian Federation, as well as the criminal blockade against Cuba which demonstrated “the direction the new winds of United States unilateralism are blowing”.  Expressing support for dialogue to resolve the current nuclear crisis, he rejected claims that Venezuela should not be allowed to serve on the Human Rights Council.  It was the United States, not his country, that did not deserve to belong to that body, as the former was responsible for unjustified wars, clandestine jails, unilateral coercive measures and unacceptable migratory polices.  The United States was also the only country that had ever used nuclear weapons.

Recalling that in 2003 the United States had invaded Iraq based on false claims that it possessed weapons of mass destruction, he said it now sought to build a wall on its southern border and reduce the flow of critical remittances around the world.  The United States had failed to ratify 72 per cent of global human rights treaties and lacked national systems to protect human rights within its own borders.  Abuses being committed in the United States included the killing of African Americans by police officers, large numbers of homeless people and gender discrimination.  That country had also fabricated reasons to launch wars in Libya and Syria.  Thanking the Secretary-General for his good offices in the territorial dispute between Venezuela and Guyana, which he hoped would soon be peacefully resolved, he welcomed progress being made in Colombia’s peace process but voiced concern about drug production taking place there.  “Venezuela is not a drug producing country,” he stressed, adding that countries accounting for the largest demand for drugs were most responsible for that phenomenon.

Voicing solidarity with those affected by recent natural disasters, he said such events had made millions of people victims of “a war they did not choose”, stressing:  “Let us not change the climate, let us change the system.”  The responsibility must not fall on developing countries alone; it was especially unfair for the United States — the world’s largest emitter — to withdraw from the Paris Agreement.  Venezuela, subject to constant aggression from hegemonic Powers that sought to seize its natural resources, had suffered numerous attacks, including most recently four months of induced political violence intended to displace President Nicolas Maduro.  However, those attempts had been neutralized by the Venezuelan people through their election of a National Constitutional Assembly aimed at restoring peace and stability.  The country had always employed social dialogue to deepen its democracy and he welcomed the decision of the opposition to return to that path and engage in future elections.  Finally, he said United Nations reform must aim to create a more equitable world order free from hegemonic aggression, and provide people with the highest degree of happiness, peace and stability.