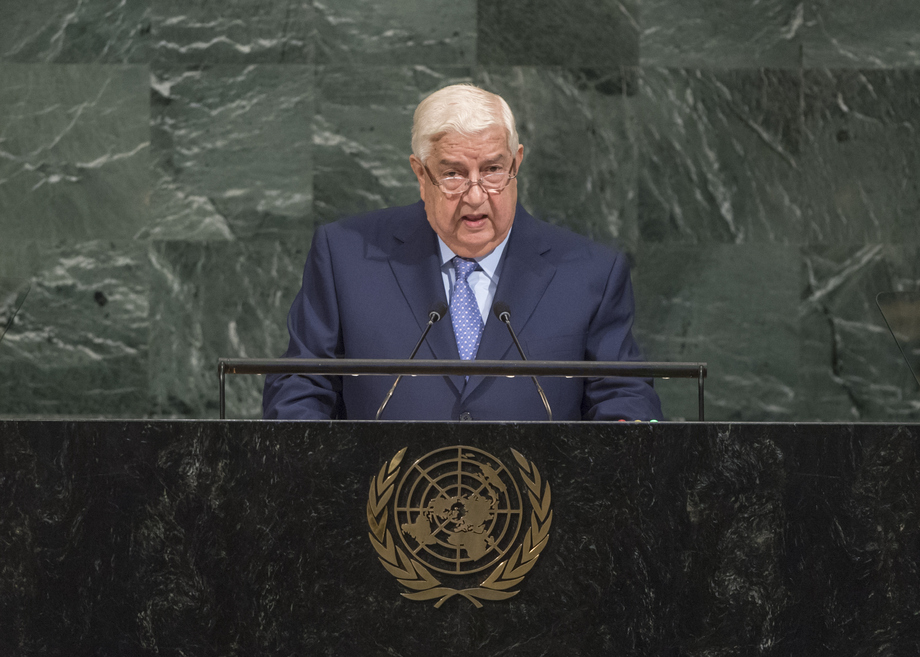 WALID AL-MOUALEM, Minister for Foreign Affairs of Syria, warned that the world faced a standoff between two sets of forces — those seeking to dominate nations and their riches by re-establishing a unipolar global order, fuelling war and violating international law — and those working tirelessly to create a more balanced, secure and just world that respected the principles of sovereignty and self-determination.  Countries embracing the former view falsely believed they could use terrorism to satisfy their greed and advance ill-conceived agendas.  “No people has suffered at the hands of terrorism more than the Syrian people,” he said, who, for six years, had fought against terrorists pouring in from all over the world.  Expressing Syria’s commitment to eradicate that threat, he said the Government had followed two main tracks since the start of the war:  combating terrorism and working towards a political solution to end the bloodshed.

On the counter-terrorism front, he said that while the Syrian Arab Army and its allies were uprooting terrorists, that threat persisted.  “Terrorism and the underlying Takfirist extremist ideology will continue to spread like a tumour throughout the world” unless all parties confronted it together.  Any such endeavour must respect the sovereignty of States and give up the illusion that terrorism could be used as a tool for political gains.  On the political front, President Bashar al-Assad’s amnesty decrees had facilitated local reconciliation efforts, allowing tens of thousands of internally displaced persons and refugees to return to improved living conditions.

Expressing support and optimism about the Astana process and its resulting de-escalation zones, he recalled pledges by Islamic State in Iraq and the Levant (ISIL/Da’esh) and Al-Nusrah to join that process, which would be the true test of how committed they and their Turkish sponsors were.  “Turkey under [President] Erdoğan has persisted in its aggressive policies towards the Syrian people and has continued to labour under the illusion that terrorism will help serve its subversive agenda,” he said, underscoring the stark contrast between that position and the constructive role played by the Russian Federation and Iran.  Syria reserved the right to respond to any violation by any party, stressing that the de-escalation zones were a temporary arrangement that must not violate its territorial integrity.

Reaffirming Syria’s commitment to the Geneva process — which had yet to bear fruit in the absence of a national opposition that could be a partner in Syria’s future — he said countries with influence, including permanent Security Council members, had blocked meaningful progress.  For decades, Israel had occupied Arab territories in Palestine and the Syrian Golan, committing crimes against innocent civilians.  It had provided support to Takfirist terrorist gangs, bombed Syrian Army positions and offered unlimited support to terrorists in Syria.  His country would never forget its inalienable right to recover the occupied Syrian Golan along 4 June 1967 lines.

For more than six years, States and parties behind the war in Syria had falsely accused the Syrian Government of using chemical weapons, he said, yet the Organization for the Prohibition of Chemical Weapons (OPCW) had confirmed that Syria had fully eliminated its chemical programme.  Describing those claims as excuses for continued aggression against Syria, he said the “so-called” international coalition led by the United States, created to allegedly fight ISIL, had, in fact, killed many more Syrian women and children and destroyed vital infrastructure.  It also had used phosphorous bombs and other internationally prohibited weapons.  Any presence of foreign troops in Syria without the Government’s consent was a form of occupation and violated international law, he said, adding similarly, that unilateral coercive measures were a clear sign of hypocrisy on the part of those countries employing them.