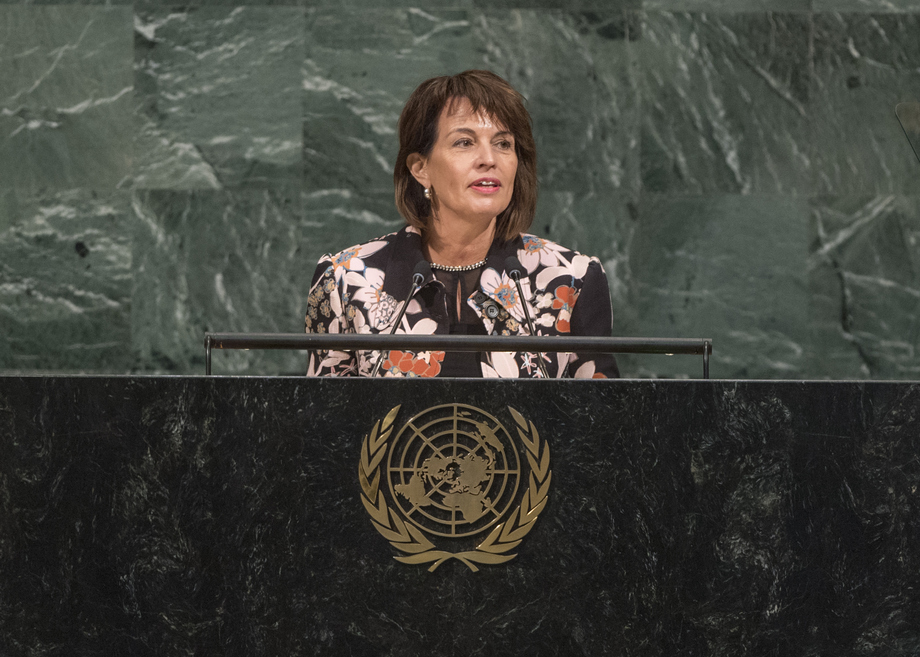 DORIS LEUTHARD, President of Switzerland, said complex challenges, such as climate change, humanitarian disasters and migration, spanned geographical borders, and could only be solved through collective efforts.  A strong multilateral system centered on a strong United Nations must be established.  “We need a strong United Nations and the fact that we need to repeat this today should set the alarm bells ringing,” she stressed.

At the same time, it was important to recognize the milestones that Member States had achieved in addressing global challenges, she said, citing the 2030 Agenda for Sustainable Development and the 2016 Paris Agreement as examples of how countries had come together to work towards common goals.  The success of those efforts would depend on how well those instruments were implemented.  She welcomed reforms outlined by the Secretary-General in the areas of peace and security, development and management, expressing particular support for the priority placed on prevention, as the price to pay for conflict in humanitarian, economic and financial terms was much higher than the costs of prevention activities.

It was essential to promote human rights and she invited States to support 13 June call demanding that human rights be placed at the heart of prevention efforts, stressing that mediation was another important means for preventing conflict.  Citing the migration crisis in Europe as a challenge requiring cooperation, she stressed:  “We need solutions based on solidarity between countries.  All countries must do their part.”  Turning to the nuclear crisis on the Korean Peninsula, she said Switzerland was committed to non-proliferation and the complete elimination of nuclear weapons.  “Only negotiations and a diplomatic process will make it possible to find a solution to the security problem posed by the nuclear crisis in the Korean Peninsula,” she added.

Trust was another important aspect, she said.  To take effective preventive measures, it was important to have confidence and at the United Nations, the quality of the partnership established with the host country was crucial.  Sexual exploitation and abuse had broken that bond of trust and she expressed support for the Secretary-General’s actions against all forms of such behaviour committed by United Nations personnel.  On migration, notably in Europe, she advocated solutions based on solidarity among countries and stabilizing the political situation in Libya.  She expressed hope that the Global Pact for Migration would address both the challenges and opportunities brought about by migration.  All countries must do their part.  Access to the Internet, the impact of digitization on sustainable development and cybersecurity must be addressed hand in hand, she said, also stressing the need for effective management at the United Nations, making reforms indispensable.

In an interconnected world, she said, dialogue was essential and must be conducted on large scale and include all relevant parties.  Yet, political dialogue had proven insufficient on the issue of climate change.  The Paris Agreement must be quickly implemented, she said, noting the importance of the private sector’s role in devising solutions.  Indeed, scientific diplomacy allowed for making the correct decisions, and politicians must base their decisions on evidence-based policy, she said, convinced of need invest in effective multilateral system.  “To each his own is not a viable alternative,” she asserted.