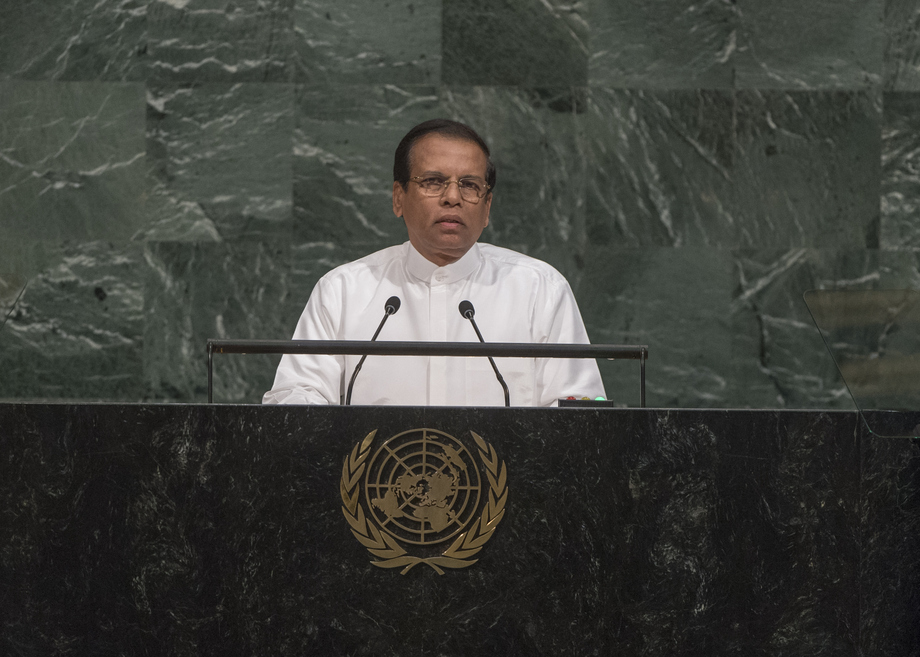 MAITHRIPALA SIRISENA, President of Sri Lanka, said that since being elected in 2015, he had transferred some executive powers to his country’s Parliament.  A leader transferring such an excess of power to another organ set an example for the world.  As leaders came into power in democratic countries, they must safeguard democracies and yield their power to build democratic institutions.  World history had repeatedly shown leaders were reluctant to do so.  The holding onto power by the few continued to lead to mass division.

“I have established democracy in my country and have taken action to get rid of political groups which were moving toward autocracy,” he continued.  A great effort was being undertaken by Sri Lanka to alleviate its people of poverty, as the country embarked on a set of programmes to develop itself.  Sri Lanka had suffered from a protracted conflict which had lasted for 30 years and had wreaked havoc on its economy.  He stressed that sustainable development must be given priority not only in Sri Lanka but worldwide.

Even looking at the United States, a powerful nation, one could see how it had been recently affected by climate change, he said, stressing that the Paris Agreement was important and its implementation essential for the very survival of humanity.  Sri Lanka was focused on developing local agriculture, taking the country in a new direction and bringing about change through a set of new national programmes.  One such programme focused on safeguarding children from drugs and physical abuse.  Another initiative aimed to guarantee the rights of women, he added, noting that the Constitution had been amended towards that end.

The international community must work together to fight drug use, he continued.  When his Government had come to power, there were myriad issues that needed to be addressed.  Large sums of loans had to be repaid and several human rights concerns addressed.  To that end, he had worked for the past two years to strengthen local economies with plans to pay off those loans.  Regarding several resolutions passed by the Human Rights Council relating to violations in Sri Lanka, his Government had given those concerns priority and was working on resolving them.

National reconciliation was important particularly among different groups and people speaking different languages, he continued, also adding:  “We want to create a country with discipline, a country with higher morals.”  He commended the work of the United Nations, emphasizing its role in ensuring the independence and sovereignty of his country.  Certain extremist elements expected fast results, he said, emphasizing:  “They want short-term solutions.”  Sri Lanka wanted to create peace and unity and to promote brotherhood among its people through prosperity.  “Ours is a slow and steady pace.”