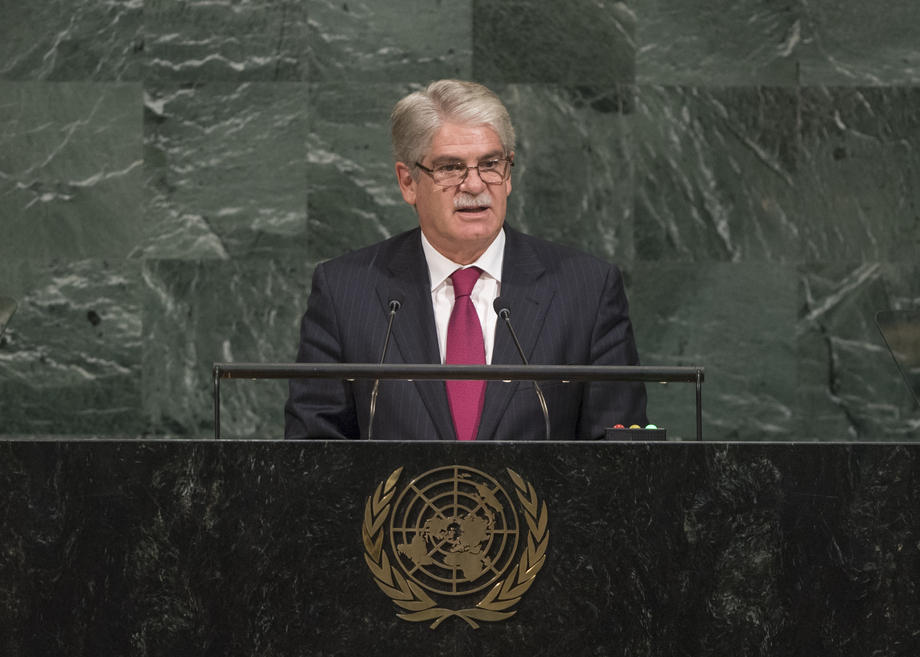 ALFONSO DASTIS QUECEDO, Minister for Foreign Affairs and Cooperation of Spain, said the modern world was highly interdependent and stressed the need to address extreme poverty, hunger, desertification, global warming and protection of the environment, as well as the orderly management of migrant flows.  Touching on the Middle East, he said the conflicts in Syria and Yemen required political solutions and expressed his country’s support for a free, democratic and united Iraq.  Compliance with the agreement with Iran would contribute to nuclear non-proliferation and peace in the region, he said, while stressing support for a two State-solution to the Israeli-Palestinian conflict.

He welcomed the Secretary-General’s intention to relaunch talks between parties in Western Sahara and expressed support for a political solution in Libya.  Despite concern over the situation in Mali, the Central African Republic and South Sudan, he praised the work of the United Nations on the ground.  Turning to the Democratic Republic of Congo and Burundi, he urged that those countries respect the Constitution.  Furthermore, he reiterated Spain’s support to Afghanistan in the fight against extremism and terrorism and urged the Democratic People’s Republic of Korea against political and economic isolation and for engagement on irreversible and verifiable denuclearization of the Korean Peninsula.

Speaking on other regions, his country praised the peace agreement in Colombia, called on Venezuela’s Government to carry out real dialogue with the opposition and supported the International Commission against Impunity in Guatemala.  On the annexation of Crimea, he said that was a violation of Ukraine’s sovereignty and territorial integrity, which was regrettable in the twenty-first century.  He voiced concerns over the conflict in eastern Ukraine, recommending compliance with the Minsk Agreements.  Finally, referring to Brexit and regarding the question of Gibraltar, he invited the United Kingdom to negotiate an agreement:  Spain made a proposal that “combines the unwavering claim of Spanish sovereignty over the colony with a statute that benefits the Rock’s inhabitants so that they may continue to enjoy the advantages of European Union membership”.