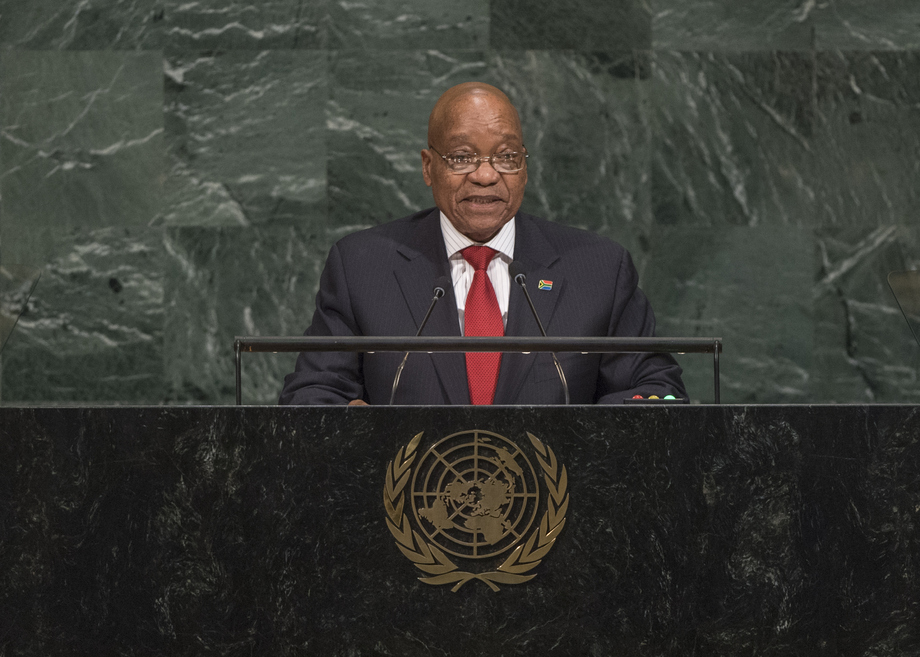 JACOB ZUMA, President of South Africa, said the current socioeconomic world order structure was deepening the divide between the global North and global South.  Unequal and unjust economic power relations were sharply manifested in Africa.  Rich in mineral resources, the region had the highest number of least developed countries.  Although developed countries fuelled development from the African continent’s resources, a significant “chunk” was lost to illicit financial outflows.  Those billions of dollars would have been utilized to provide education, health care, housing and other basic needs.  Money laundering, tax evasion and avoidance, corruption, and transfer pricing by multinational companies remained some of the biggest challenges to economic growth and stability.  Such corruption undermined the integrity of the financial system, efficient tax collection and the equitable allocation of resources.  He appealed to Member States, particularly developed countries and the United Nations, to contribute to a fair global economic environment and to eradicate illicit financial flows.

He welcomed support to resolve conflicts through the promotion of the African Union’s “African solutions to African problems and challenges” through a “goal of silencing the guns by 2020” as contained in the African Union’s Agenda 2063 action plan.  While voicing hope for a resolution addressing the crisis in Libya, he noted that little effort had been made by the African Union to promote stability, with the majority of countries focused on the migrant crisis in Europe.  The war in Libya was contributing to the destabilization of the region and had created a corridor for illicit arms trafficking and terrorist activities.  Had earlier warnings been heeded, the supply of arms to Libya and Syria would have been avoided and the world would have greater peace today.  He called for an immediate resolution of those conflicts, while cautioning against the imposition of foreign solutions through military means.

Addressing the matter of the Democratic People’s Republic of Korea, he called for the end of the nuclear weapons program, as “there are no safe hands for weapons of mass destruction”.  The only viable solution was their total elimination, as expressed in the United Nations Treaty on the Prohibition of Nuclear Weapons.  “It can no longer be acceptable that some few countries keep arsenals and stockpiles of nuclear weapons as part of their strategic defence and security doctrine, while expecting others to remain at their mercy,” he said.  Any accidental detonation would lead to a disaster of epic proportions.

All Member States should sign and ratify the ban and reaffirm the inalienable rights of States to peaceful uses of nuclear energy as outlined in the treaty, he continued.  South Africa was the biggest producer of medical isotopes used in the treatment of cancer patients and the country would continue to address the peaceful use of atoms to address challenges of socioeconomic development.  He also urged that the Security Council be reformed, as it was unable to carry out its responsibilities for the maintenance of international peace and security.

The seventy-second session of the General Assembly coincided with the centenary anniversary of Oliver Reginald Tambo, who had led the African National Congress liberation movement against apartheid and racism in South Africa, he pointed out.  Tambo firmly believed in the role of multilateralism and the centrality of the United Nations and would have pleaded for support to the Palestinian people and the people of Western Sahara.  The General Assembly must show support for their struggles, similar to what was shown in support of the South African struggle for liberation.  He additionally expressed disappointment in the United States’ June 2017 decision that reversed progress in ending the Cuban blockade.