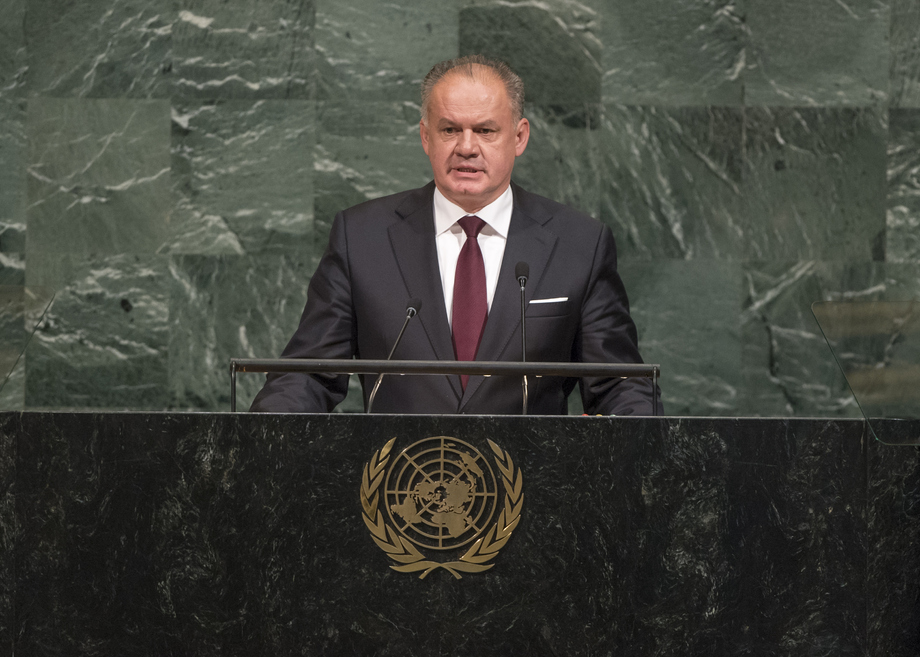 ANDREJ KISKA, President of Slovakia, said that egoism, ignorance and narrow‑minded national or personal interests were the greatest enemy to efforts to make a real difference in the world.  The principles of peace and security were essential for the dignity of all people.  World leaders, as members of the United Nations, must uphold such principles, enforce them and punish violators.  Yet, far too many people were dying in senseless conflicts or suffering displacement due to violence.  The enormous human tragedies, damage from armed conflicts and the refugee crisis depleted much-needed resources for social and economic development.  How world leaders treated their people was important to international peace and security, he said, expressing alarm about the recent findings of the use of chemicals weapons on the Syrian people by the Assad regime and the atrocities in Rakka, in Mosul, and other places which demonstrated how little respect was paid to human lives.

Short-sighted interests intended to spread instability were undermining the collective efforts to secure peace and security, he said.  The selfish pursuit and egoism of the so-called spheres of influence were crippling peaceful coexistence among nations, using such influence to cover violations of international order and justify disrespect for sovereignty.  Similar consequences could be seen in European countries such as Ukraine, Georgia or the Republic of Moldova which had had their sovereignty undermined by an “aggressive neighbour”.

One of the worst threats to international peace and security in recent history, he continued, was the threat of nuclear weapons by the Democratic People’s Republic of Korea.  Such grave disrespect for human life could not be tolerated.  He strongly called on the leaders of the Democratic People’s Republic of Korea to stop developing weapons of mass destruction, and he encouraged them to engage in dialogue to build peace on the Korean Peninsula.  He called for collective resolve to stand up for the United Nations principles and said some countries had a special responsibility to do regionally or internationally.  “There is no room for geopolitical games or economic gains at the expense of our common security,” he said, when millions of lives were at stake.

Turning to climate change, he said the adoption of the Paris Agreement in 2016 to mitigate the consequences of human impact on the environment may become the present generation’s ultimate legacy and give future generations a chance to adapt and live safely in a changed environment.  He reiterated the importance of keeping promises and delivering results as part of climate change efforts.  “No money, no short-term economic interests could possibly compensate for the irreparable damage if we fail to act together and change our irresponsible behaviour,” he said, warning of more severe consequences.  Slovakia understood the urgency for collective action and had pushed for the swift ratification of the Paris Agreement during its tenure as President of the European Union last year.  “We will implement all necessary national measures to fulfil our obligations,” he said, stressing that the accord must be fully implemented.

He underlined that while striving for efficiency reforms, the core of the United Nations must be respected without exception, and emphasized that to succeed in addressing today’s pressing issues, responsible leaders must forego national egoism and ignorance.  He closed by stating, “to stand true to the principles of the UN Charter, to be honest with each other by keeping the promises we give and to deliver results, in words and in deeds.  Because there is no more noble task than for us than to serve our people for them to live in peace, in dignity and in prosperity.”