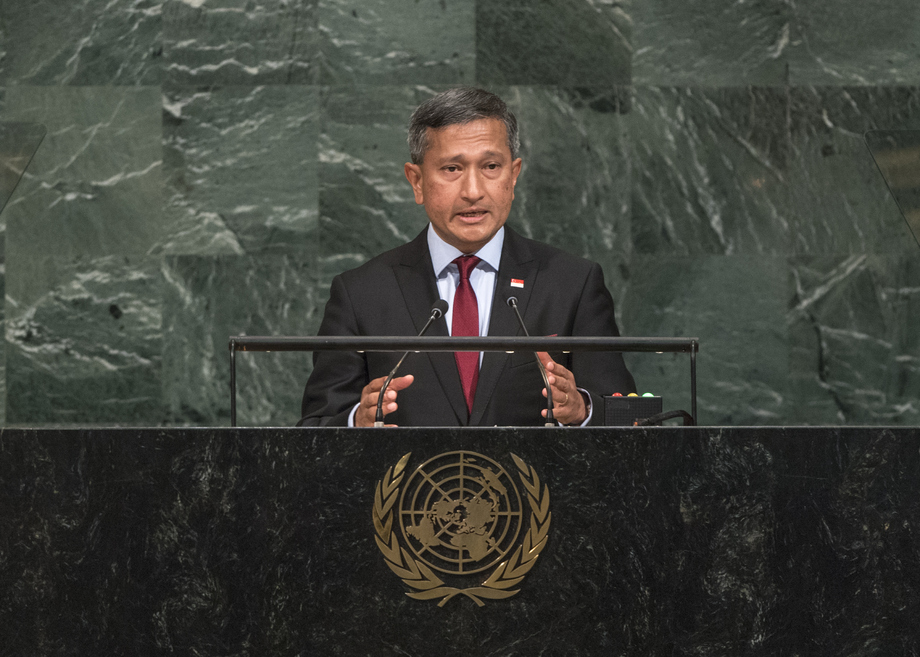 VIVIAN BALAKRISHNAN, Minister for Foreign Affairs of Singapore, pointing to old but active fault lines of race, language and religion, said that, while new conflicts had emerged in many regions of the world, long-standing conflicts had not been resolved.  He condemned the Democratic People’s Republic of Korea’s missile and nuclear tests and called on the country to avoid further provocative action.  Recalling his meeting with Myanmar’s State Counsellor, Aung San Suu Kyi, last week, he added that she was deeply troubled by the religious and ethnic tensions in the Rakhine State.  Singapore was committed to working with the Association of Southeast Asian Nations (ASEAN) to help Myanmar find long-term solutions to restore stability in Rakhine.

“No nation can solve transboundary problems alone”, he emphasized.  The United Nations played a critical role for being a platform for cooperation.  It was also the universal body best placed to address problems in global norms.  Adoption of the Paris Agreement on Climate Change and the 2030 Agenda for Sustainable Development had showed that multilateralism could respond to new challenges.  However, the Organization must also stay relevant and effective by being able to deal with emerging challenges such as cybersecurity, counter-terrorism and economic disruption caused by digital technologies, such as artificial intelligence.  The Secretary-General’s initiatives to reform and restructure the United Nations were welcomed, as they would optimize synergies to meet those new challenges.

Regional organizations also played important roles in establishing effective multilateralism, he continued.  In South-East Asia, ASEAN had not only fostered regional economic integration but also secured regional peace and national resilience.  Achieving growth and sustainable development would require putting in place an open and global architecture. “An open, rules-based multilateral trading system allows every country to prosper,” he said.  The World Trade Organization and the Group of 20 were crucial in that aim.  While hard work and self-reliance were also core to achieving sustainable growth, more jobs must be created, ensuring that no one be left behind.  That included establishing policies that made sure vulnerable populations received the help they needed.  Noting that the digital revolution had changed the way the world worked, communicated and lived, he added “we need to restructure our economies to create new and better jobs for our people”.