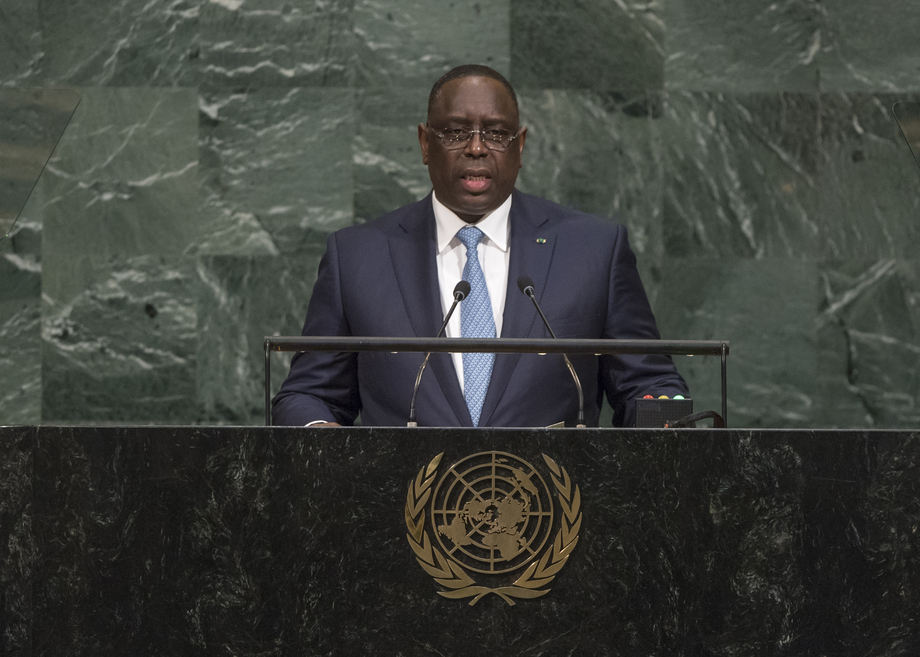 MACKY SALL, President of Senegal, said the idea of a better world for all was being challenged by war, terrorism, food emergencies, and unprecedented levels of global warming.  Senegal firmly condemned terrorism, but could not accept equating Islam with violence, he said, emphasizing the need to find agreed solutions in combating terrorism.  The fourth Dakar International Forum on Peace and Security in Africa, to be held on 13 and 14 November, would focus on Islam’s doctrinal response to violent extremism.

He went on to underscore Senegal’s participation in seven peacekeeping operations, including MINUSMA, and supported the G-5 Sahel countries (Burkina Faso, Chad, Mali, Mauritania, Niger) in their struggle against terrorism.  Senegal also supported the Palestinian people’s right to a viable State, living side by side with Israel within internationally recognized borders.

Expressing Senegal’s serious concern about atrocities against the Muslim Rohingya population in Myanmar, he called for international action to end that human tragedy.  It was also vital to preserve the integrity of the Paris Agreement and to work towards mutually beneficial exchanges, including fairly priced commodities.

The time had come to afford Africa the place it deserved on the Security Council, he stressed, adding that it was also time to reform the rules of financial and economic governance, including by instituting more effective measures to combat tax evasion.  It was time to stop looking at Africa as the continent of the future, he said, underlining Africa’s wish to be a stakeholder in the present, with mutually beneficial partnerships.

It was in that spirit that Senegal would work with all friendly partner States after the end of its term on the Security Council, he said.  “We continue to have faith in multilateralism,” he added, noting that past generations knew that isolationism and belligerence were a dead end.  Peace was a work in progress, but its foundations were teetering.  All humankind saw itself as being under threat, and everyone must work together to preserve peace on the basis of shared humanity, a common fate and common destiny, he said.