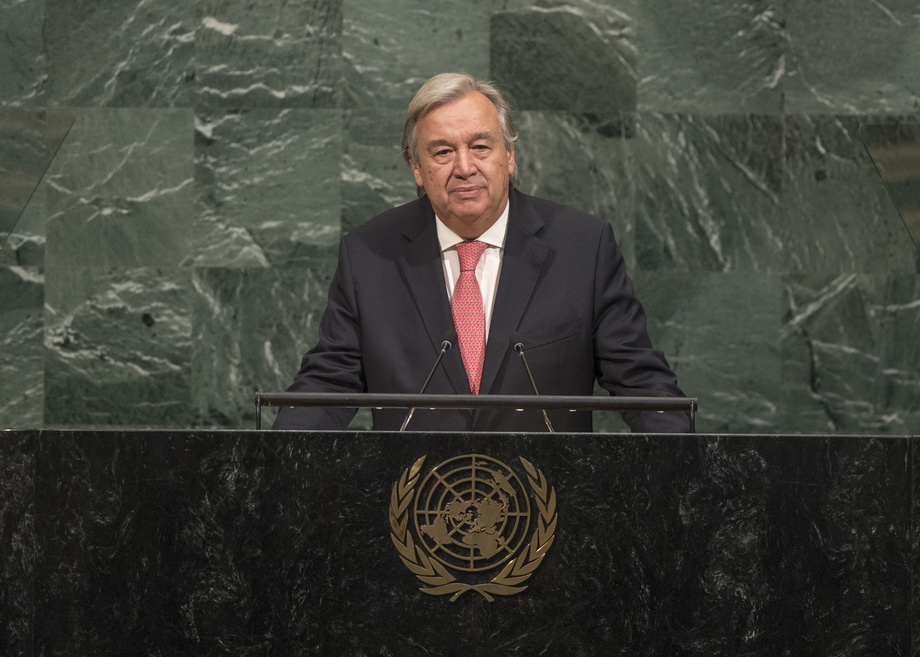 ANTÓNIO GUTERRES, Secretary-General of the United Nations, outlined several grave challenges facing humanity, emphasizing that “our world is in trouble; people are hurting and angry.”  Insecurity was rising, inequality growing, conflict spreading and the climate changing.  While the global economy was becoming more integrated, the sense of global community was disintegrating, with societies fragmented and political discourse polarized.  “Trust within and among countries is being driven down by those who demonize and divide,” he stressed.  “We are a world in pieces.”

Emphasizing that trust could be restored if people worked together, he cited several threats that stood in the way.  First among them was the present nuclear peril, he said, noting that global anxieties about nuclear weapons were at their highest since the Cold War.  “The fear is not abstract — millions of people live under a shadow of dread cast by the provocative nuclear and missile tests of the Democratic People’s Republic of Korea,” he said.  Condemning those tests unequivocally, he called on the Democratic People’s Republic of Korea and all Member States to comply fully with Security Council resolutions, and on the Council itself to maintain unity on the matter.  “The solution must be political,” he said.  “We must not sleepwalk our way into war.”

The threat of terrorism was also taking a toll, he said, destroying societies, destabilizing regions and diverting energy from more productive pursuits.  Calling for intensified international efforts to disrupt terrorism networks, reclaim territory and prevent attacks, he announced his intention to convene the first-ever gathering of heads of counter-terrorism agencies in 2018, aimed at forging a new International Counter-Terrorism Partnership.  More must be done to address the roots of radicalization, including real and perceived injustices and high levels of unemployment and grievance among young people.  Political, religious and community leaders had a duty to stand up against hatred and serve as models of tolerance.

Further, he said unresolved conflicts and systemic violations of international humanitarian law — including the dramatic escalation of sectarian tensions in Myanmar’s Rakhine State which had forced more than 400,000 people to flee — posed additional global threats, he said, calling on the Myanmar authorities to end their military operations and allow unhindered humanitarian access.  They must also address the grievances of the Rohingya, whose status had been left unresolved for far too long.  From Syria to Yemen, from South Sudan to the Sahel, Afghanistan and elsewhere, only political solutions could bring peace.  Terrorism would only be eradicated if such conflicts were resolved.

Citing climate change as another threat placing humanity’s hopes in jeopardy, he said millions of people and trillions of assets were at risk from rising seas and other climate disruptions.  The number of natural disasters had quadrupled since 1970.  “It is high time to get off the path of suicidal emissions,” he stressed.  “We know enough to act today; the science is unassailable.”  Urging Governments to implement the Paris Agreement on climate change with even greater ambition, he cited evidence that economies could grow even as emissions were reduced.  At the same time, the gains from expanding trade and technological advances had not been shared equally around the world, and gaping inequalities existed.  Indeed, eight men held the same wealth as half of humanity, he said, emphasizing that the 2030 Agenda for Sustainable Development — adopted in 2015 — provided a blueprint to change that course.

Describing additional threats, he said technology and innovation, which was at the heart of shared progress, had a “dark side” that must be confronted.  Cybersecurity threats were escalating, and cyber war was now more able to disrupt relations between States, as well as the structures and systems of modern life.  Meanwhile, human mobility — “which I do not perceive as a threat, even if some do” — could bring the world together if properly managed.  While every country had the right to protect its own borders, such actions must protect the rights of people on the move.  It was important to re-establish the integrity of the refugee protection regime and the simple decency of human compassion.  With a truly global sharing of responsibility, the numbers could be managed.

Finally, he voiced his commitment to the goal of reforming the United Nations by building a development system to support States in bettering peoples’ lives, reinforcing the ability to safeguard peace, security and human rights, and embracing management practices that advanced those goals, rather than hindering them.  “We are here to serve,” he said.