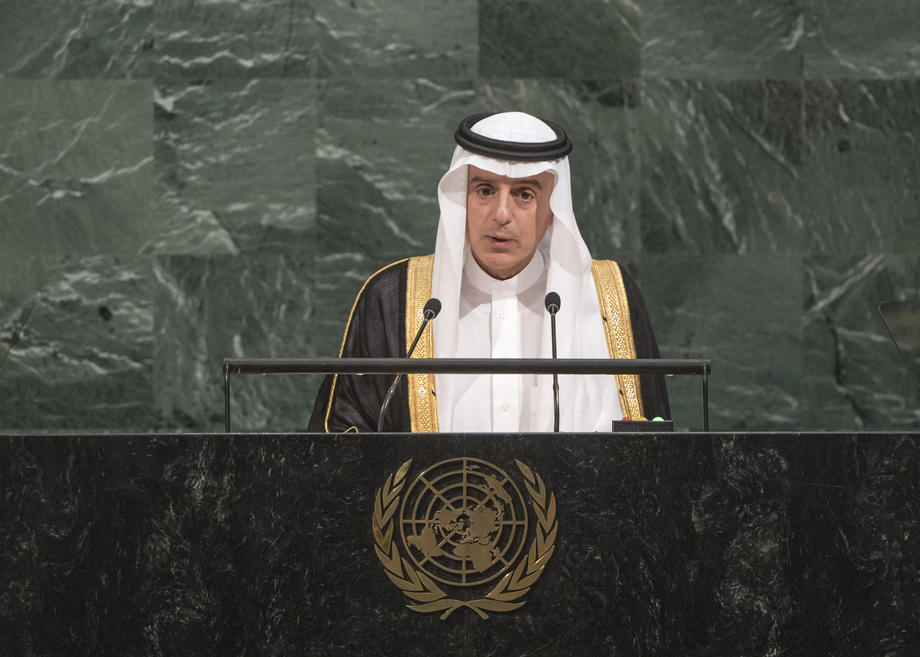 ADEL AHMED AL-JUBEIR, Minister for Foreign Affairs of Saudi Arabia, said the Israeli-Palestinian conflict was the most protracted in the region’s history and had led to a great deal of human suffering.  Nothing could justify the continuation of that conflict, particularly when there was wides-pread agreement over the two-State solution.  International determination was needed to make that solution a reality.
On Yemen, he said his country was attempting to save the Yemeni people so they could recover their State.  That undertaking had only come following sustained political efforts to preserve the safety and stability of Yemen, as well as its territorial integrity and independence.  Saudi Arabia fully supported the political process in Yemen, he said, and would stand by the United Nations and its Special Envoy to arrive at a political solution, in line with resolution 2216 (2015).  Saudi Arabia was aware of the scope of the humanitarian suffering in Yemen and had spared no effort to help Yemenis, having contributed $8 billion in humanitarian and medical assistance.

Strongly condemning the policy of repression and forced displacement that Myanmar was carrying out against the Rohingya, he said that tragedy required an urgent response to bring it to an immediate end.  Saudi Arabia continued to provide humanitarian assistance to the Rohingya minorities, he said, adding that his country also hosted more than half a million of those refugees.  Furthermore, the King had personally intervened with neighbouring States and worked with Bangladesh to help ensure safe passage and decent living conditions for those refugees.

The threat of terrorism was among the most serious challenges facing the international community, he said.  Saudi Arabia would continue to work to counter terrorism and extremism in all forms and manifestations.  The crisis in Qatar had jeopardized his country’s policy of cutting off funding to terrorists and extremists.  Doha’s financial support of terrorism, dissemination of violent hate speech, was unacceptable, as was its policy of providing safe haven to those who violated the law.  The position taken by the four States was meant to demand that Qatar follow the principles of international law in fighting terrorism.

Speaking in exercise of the right of reply, the representative of Qatar responded to Saudi Arabia.

Speaking in exercise of the right of reply, the representative of Iran responded to Saudi Arabia.