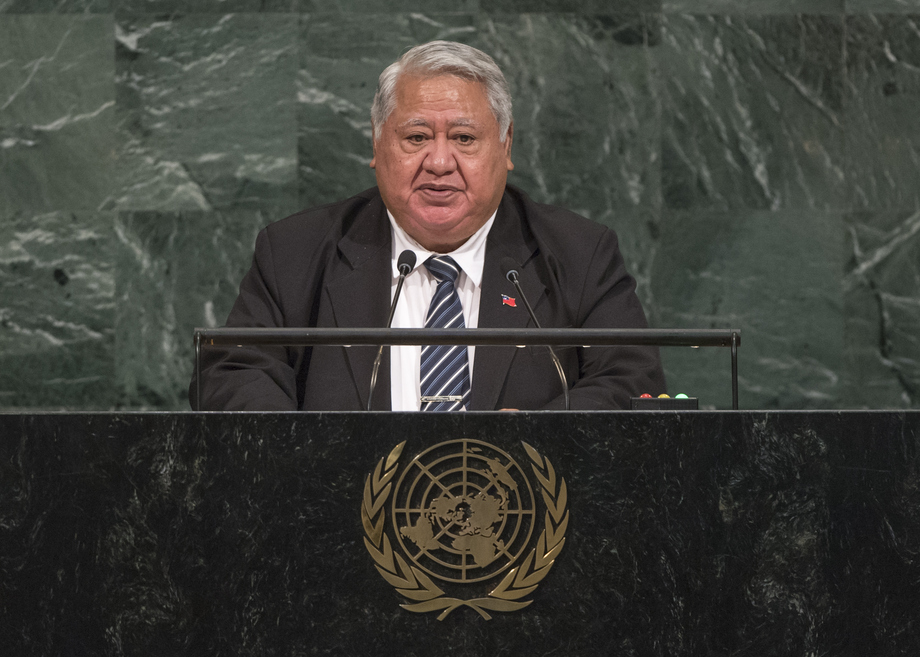 TUILAEPA SAILELE MALIELEGAOI, Prime Minister of Samoa, said small island Pacific countries stood to lose the most in the unfolding “power drama” being played out on the Korean Peninsula, which was why he signed yesterday the Treaty on the Prohibition of Nuclear Weapons.  “No matter the noble goal for having such arsenals, availing them to the wrong and unprincipled hands is a recipe for doom and mayhem,” he explained.  But, not all was lost.  The New York Declaration for Refugees and Migrants offered a unified approach to addressing the plight of displaced peoples, and the creation of the United Nations Counter-Terrorism Office was another positive development.

Climate change was a perpetual priority for Samoa and the region, he said, as small islands’ limited resources and lack of adaptive capacity made rehabilitation a mammoth undertaking.  Samoa was committed to respecting human rights and the rule of law, he said, noting that, in August, the first-ever Human Rights Council expert group had visited his country to assess progress in eliminating discrimination against women and promoting women’s rights.  Samoa had “great faith” in the protection offered by the rule of law, particularly to small countries that lacked armed forces, calling the International Criminal Court an important part of the architecture for world peace and expressing support for the early activation of the Kampala amendments.

He said Samoa had aligned its domestic policies and legislation to meet its international obligations to fight terrorism, and on the peacekeeping front, its support for the United Nations was underscored by 17 years of uninterrupted policy deployment to Liberia, Sudan, Timor-Leste, South Sudan and Darfur.  He condemned sexual exploitation and abuse in peacekeeping, stressing that Samoa had signed the international compact to eliminate those heinous acts.  He went on to say that the Pacific regional road map for the Sustainable Development Goals complimented Samoa’s own integrated approach for implementing the 2030 Agenda, the Samoa Pathway and the Paris Agreement.

Noting that several partnerships and voluntary commitments specific to small island developing States had been launched at the 2016 Ocean Conference, he stressed the need to address gaps and emerging issues before the midterm review.  To drive the regional policy agenda, Samoa had reaffirmed the Framework for Pacific Regionalism and endorsed the “Blue Pacific” identity.  Regional priorities included illegal, unregulated, unreported fishing and overfishing; support for capacity-building; and collective arrangements to help regional Governments recover from national conflicts and crises.

On the security front, he acknowledged the successful conclusion of the Regional Assistance Mission to the Solomon Islands that had brought together peacekeepers from the Pacific Islands Forum member countries.  Leaders had agreed to expand the concept of security, inclusive of human security, humanitarian assistance, environmental security, resilience to disasters and climate change.  The Pacific would continue to call for nuclear non-proliferation, as radioactive contaminants in the Marshall Islands remained significant concerns.  To that end, he requested urgent assistance from United Nations and the United States.