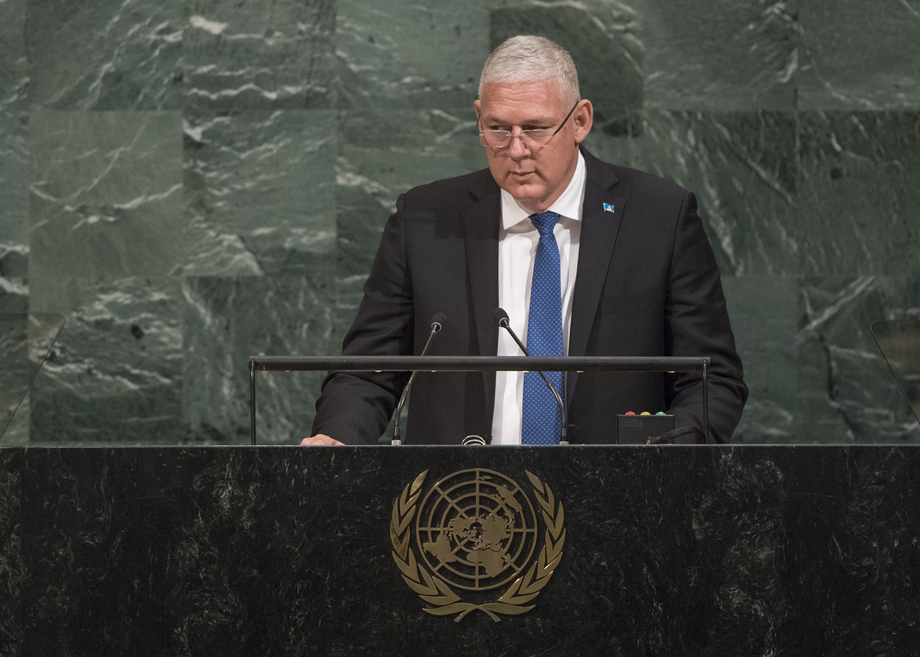 ALLEN MICHAEL CHASTANET, Prime Minister and Minister for Finance, Economic Growth, Job Creation, External Affairs and the Public Service of Saint Lucia, said climate change was reshaping the world.  He expressed sadness over the devastation wrought on the Caribbean by hurricanes, and dismay over the “silence of many and the weak acknowledgement” of others on the crisis.  “It has awakened in me the fear that we may be on our own to chart a path forward for our region,” he said.

It was impossible to avoid the facts of climate change, the impacts of which did not discriminate.  Small island developing States had warned that failure to respond would “betray our children and condemn future generations to future doom”, he said, recalling that Saint Lucia, along with most of the Caribbean Community (CARICOM), was located in the heart of “hurricane alley”.

He welcomed the leadership of France, China and Germany on climate change issues, and asked the global community to remember “we exist in one global ecosystem”.  Nobel laureate Sir Derek Walcott spoke of the sense of responsibility to one’s neighbour, a sentiment that was exemplified by Premier Orlando Smith of the British Virgin Islands when he offered solidarity after Hurricane Maria.  More broadly, he said multilateral discussions to address inequality were critical.  If States indulged in differences, inequity would persist as the driving force in the international system and people would struggle to survive.  The global reality increasingly integrated economies, the environment and people.  As such, better policies were needed to promote equity.  Inequity pervaded every aspect of the global order:  the international community had not agreed on a minimum standard of living, and had failed to maintain base standards for health care, education, housing, security and economic opportunity.

Equity would stem the flow of migration, he said, offer opportunity and dull the drive to crime.  It must be the foundation for reforming the United Nations and he expressed support for the Secretary-General’s reform effort.  “We must seek the courage and wisdom to act boldly and collectively — to revise outmoded programs that are so glaringly inadequate to the needs of our time,” he stressed.  The international community must harness new ideas and technology, invest in people and focus on outcomes, not bureaucracy.  Discourse must be grounded in common respect and a commitment to deliver, respecting the United Nations Charter.  Small and developing nations must have the opportunity to thrive in the global environment, and build stronger, more resilient infrastructure.  The future would only be secure if challenges and opportunities were met with greater cooperation and understanding.