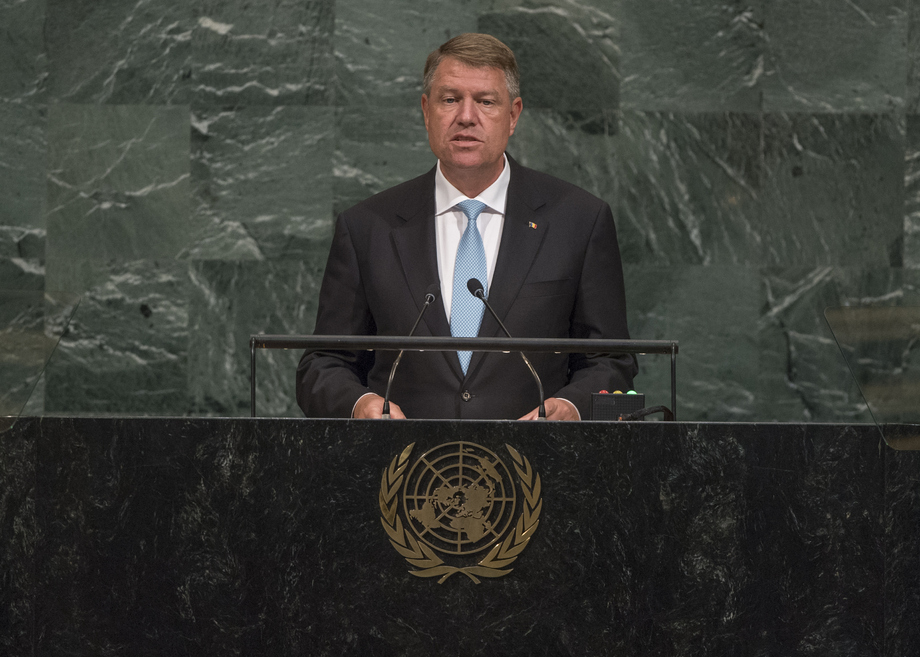 KLAUS WERNER IOHANNIS, President of Romania, noted that people across the globe continued to suffer from the brutal effects of war, poverty, inequality and injustice.  Tensions over cultural identity and faith were rising even within traditionally open and tolerant societies, natural disasters were causing increasing damage every season, and terrorist attacks were deepening the sense of insecurity.  “Even if there are some perceptions that the United Nations did not manage well the multitude and complexity of new crises, it is clear that no other path serves us better than multilateralism” in resolving them, he said, adding that a global system based on the international rule of law was paramount.  Member States must ensure that the United Nations was equipped with the essential tools in that regard, and increase their commitment to the Organization.

Pointing out that the root causes of conflicts and insecurity rarely emerged from a single source, he said the United Nations agenda aimed to promote sustainable development, promote human rights, ensure a decent life for all and build a sustainable planet.  Providing education and ensuring prosperity were the most efficient ways to prevent instability and crisis.  Towards that end, Romania had put in place development policies with real impact, aimed at advancing the implementation of the 2030 Agenda.  To share those experiences, it planned to submit its Voluntary National Review to the Economic and Social Council’s High-Level Political Forum for Sustainable Development in July 2018.

“We cannot lose sight of the stabilizing role the United Nations is playing in setting the broad parameters of contemporary international relations,” he continued, expressing Romania’s commitment to improving the Organization’s effectiveness.  No matter what a reformed Security Council looked like in the future, the United Nations needed to have robust policy planning capabilities as well as the ability to project visions for global peace and well-being “beyond the crises of the day”.  Voicing support for the Secretary-General’s reform efforts, he also welcomed the reform of the United Nations counter-terrorism architecture and efforts to make those activities a key element of the Organization’s prevention agenda.  Romania also remained committed to the common initiative developed with Spain for the future possible establishment of an International Court against Terrorism.

Underlining Romania’s expectation that the United Nations would also make an increased contribution to global efforts in the area of migration — including by addressing its main sources — he voiced support for the proposed Global Compact on Migration and for the reinforcement of the human rights dimension of that issue.  Expressing concern about security developments in and around the Black Sea — where actions were still being undertaken at the expense of the principles and norms of international law — he said the proliferation of protracted conflicts hampered the region’s cooperation and had brought mutual confidence to historically low levels.

For those reasons, the international community should support and stimulate regional cooperation, confidence-building measures and decisively address those conflicts, he continued.  Noting that Romania’s bid for a non-permanent seat on the Security Council for 2020-2021 reflected its enduring commitment to peace, development and justice, he also said the country could make a valuable contribution to the Council’s work, having served in United Nations peacekeeping missions for more than 26 years.