H.E. Mr. Miroslav Lajčák, President of the 72nd Session of the General Assembly 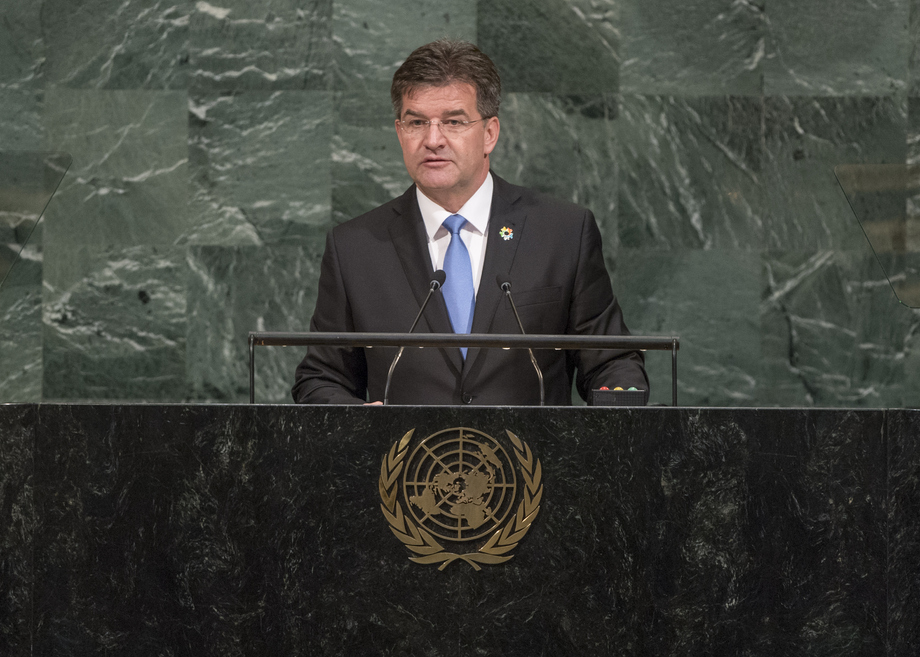 MIROSLAV LAJČÁK (Slovakia), President of the General Assembly, said persistent conflict was an ugly reality of our world.  Civilians — not soldiers — were paying the highest price, while schools and hospitals — not military barracks — were the targets of attacks.  About 65 million people were being forced to leave their homes.  Other challenges included poverty, growing inequalities, indiscriminate terrorist attacks and the worsening effects of climate change.  “These are global challenges — every country is coping with at least one.  But they are also individual in nature, touching on the lives of each person,” he underscored.

Outlining his vision for the session, he said peace and prevention should be at the centre of everything the United Nations did.  Too much time and money were being spent reacting to conflicts, and not enough was being spent preventing them.  Efforts must be recalibrated around peace and prevention.  “That is the only way to ensure that the United Nations is doing the job for which it was created,” he said.  Placing peace and prevention first was not about requesting more capacity from outside — what was missing were the conditions in which those tools could be used properly.  The “sustaining peace” resolutions should be at the top of the tool-box, challenging the international community to strengthen its responses to crises before they resulted in the outbreak or recurrence of conflict.  Prevention must become a larger part of the General Assembly’s work and an important component of both the ongoing review of United Nations peace operations, and the Assembly’s engagement with the first United Nations Office of Counter-Terrorism.  Prevention must also be better integrated into the Organization’s development and human rights work.

Next, he said, a stronger focus must be placed on people.  The United Nations was not made for diplomats or dignitaries — it was made for people.  One of the biggest tests for the Assembly would be the adoption of the first global compact for migration.  “Let me be frank here — this will be a difficult process,” he warned.  The issue of migration was highly divisive, yet, “we cannot turn this into an exercise of bureaucracy”.  The world could not be left with an agreement that only worked on paper.  International terrorism, a problem that could not be solved with guns or barriers, was another challenge that demanded a focus on people.  Indeed, the only way to address the challenges posed by migration and terrorism was to focus on people, rather than rigidly sticking to individual positions.  Viable global frameworks were needed, implemented by and for people, in real time.  “We cannot fail,” he stressed.  A focus on people must also be felt in the humanitarian field, particularly amid the violations of international humanitarian law which had become too common.

Through the 2030 Agenda for Sustainable Development and the Paris Agreement on climate change, a promise was made to improve the lives of all people, while securing the planet’s future.  However, those goals could not be met without adequate financing.  “We cannot sit and wait patiently for trillions of dollars to materialize,” he said.  “We must go out and search for them.”  In such work, human rights were crucial, as neither peace nor development could take hold without them.  Women’s leadership and participation should be a priority in settings of both conflict and peace.  United Nations reform, another priority, required an open, inclusive dialogue among Member States.  He encouraged the Organization should open its doors wider and strengthen its engagement with a wide variety of stakeholders, including regional and subregional organizations, civil society and the private sector.  Changing how the United Nations operated should start in New York to ensure real dialogue rather than a succession of monologues.  “We can look beyond our individual agendas and positions, and see the bigger picture of why the United Nations is here,” he said.