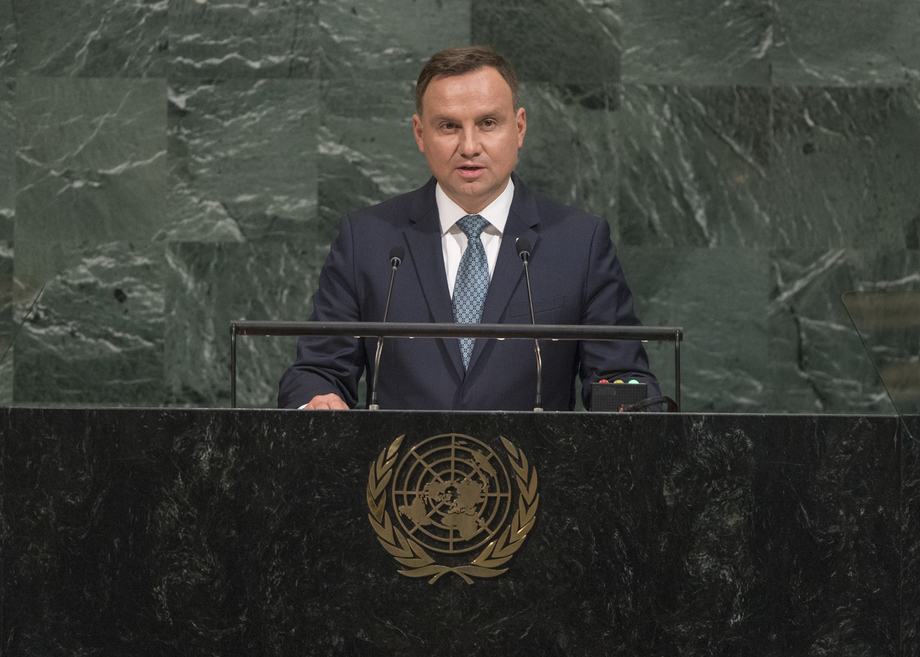 ANDRZEJ DUDA, President of Poland, described sustainable development, peace and security, and the protection of human rights as goals pursued by the international community and as the foundations of the United Nations.  The adoption of the 2030 Agenda defined the model of sustainable development at the global level, and showed the world’s ability to work together as a community, he said.  The process of eliminating poverty through the implementation of a series of goals should be accompanied by the protection and respect of economic, political, social and environmental rights as well as the right to development.

Turning to Poland’s commitment in the international arena, he expressed both his concern and solidarity about the protracted conflicts in Syria and Ukraine, noting that his country had consistently increased humanitarian aid.  He also pointed out that Poland played an active role in the protection of the environment and the fight against climate change and was honoured to host the Conference of the Parties to the United Nations Framework Convention on Climate Change in Katowice in 2018.  That summit would be of key importance due to the planned adoption of the implementation package of the Paris Agreement.

He expressed Poland’s gratitude and honour to be elected as a non-permanent member of the Security Council for the period 2018‑2019.  That reflected the country’s commitment to and involvement in ensuring international peace and security first and foremost through securing the right to sovereignty and freedom inalienably vested in each country.  Poland’s position was that international law was the only effective mechanism to preserve peaceful relations among States.  The international community and the Council should be aware of attempts by other States to influence democratic policies pursued by free nations.  It was not only the military strength of a State that predetermined the sense of security, he added, but also changes in natural environment, economic disparity, conflicts and inadequate health protection.  Those were all issues that should be included in the Security Council’s agenda.  He also underpinned the value of cooperation and of carrying out international obligations in good faith as the principles of international law regulations.  He pinpointed the violation of such regulations as well as the fundamental principles of the United Nations Charter in Georgia and Ukraine, including the principles of inviolability of borders, respect of sovereignty, and renouncing the use of military forces in resolution of disputes.  He also expressed concern at the flagrant attempt by the Democratic People’s Republic of Korea to distort the world order by its recent test of nuclear weapons violating international law and Security Council resolutions.

On human rights, he stated that their source lies in the supreme right to live.  A particularly visible problem was that of the persecution of persons belonging to religious minorities, including Christians.  Poland condemned all instances of persecution and discrimination based on religion.  The right to live in dignity should also embrace the right to uphold one’s native traditions and the traditional family model, if compatible with the fundamental rights of an individual.

In conclusion, he cited solidarity, responsibility and engagement as the values that Poland would continue to promote in the international arena to achieve sustainable development, security and peace.