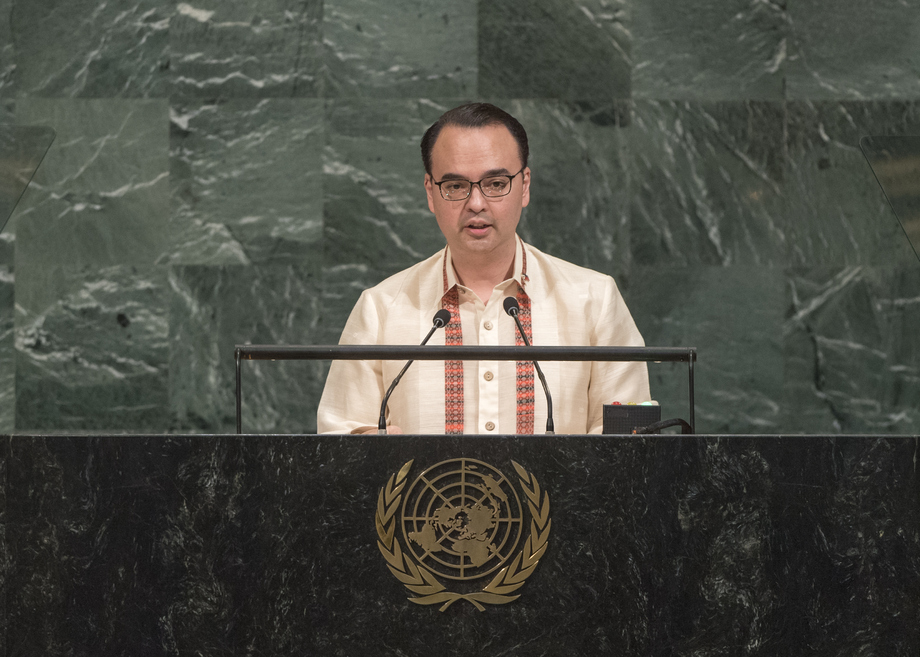 ALAN PETER S. CAYETANO, Secretary for Foreign Affairs of the Philippines, said his country was committed to addressing national threats and attaining regional peace and stability, while protecting the human rights of all its citizens.  The Government had integrated the human rights agenda into its development initiatives with the aim of protecting the most vulnerable from violence and anarchy.  It had launched a massive campaign to restore the rule of law by fighting corruption, crime and illegal drugs, aimed at protecting the safety and human rights of a population that felt unsafe in the face of rising drug-driven criminality.  “The Philippines comprehensive campaign against illegal drugs is a necessary instrument to preserve and protect the human rights of all Filipinos,” he stressed, adding that it was “never an instrument to violate any individual group’s human rights”.

Voicing his country’s expectation that its sovereignty would be respected, as would its democratically-elected Government’s assessment of national threats and ways to address them, he said all responsible leaders were obliged to serve their own citizens first.  The Philippines’ illegal drug trade had become an epidemic, penetrating at least 59 per cent of its 42,000 Government units.  “Where is sovereignty in a country where vast numbers are addicted to drugs and enslaved to their suppliers?” he asked.  Noting that President Rodrigo Duterte would always have zero tolerance for abusive police officers, he nevertheless warned that accusations before investigation did not constitute proof.  “We can no more live with drugs than with terrorism,” he stressed, noting that the Philippines had seen a symbiotic relationship between the illegal drug trade, terrorism and poverty.

For example, he said terrorists had rallied a group of extremists, criminals, mercenaries and foreign fighters to take control of the southern city of Marawi, as part of a “grand plan” to establish an extension of their shattered Middle Eastern caliphate, but the attempt had failed.  Outlining his Government’s view of territorial claims, sovereignty rights, security and sustainable development, he said those intertwined matters could be better addressed by cooperation.  The Philippines had built strong relationships through the United Nations and the Association of Southeast Asian Nations — whose chairmanship it currently held and which would begin negotiations on the long-overdue code of conduct in the West Philippine Sea/South China Sea.  “We should never tolerate human rights abuses, but neither should we tolerate misinformation, fake news on and politicization of human rights,” which undermined collective efforts to uphold the universality of human rights and the dignity of human life.  Security and human rights were not incompatible.  Rather, he said, “the first is our duty to the other”.