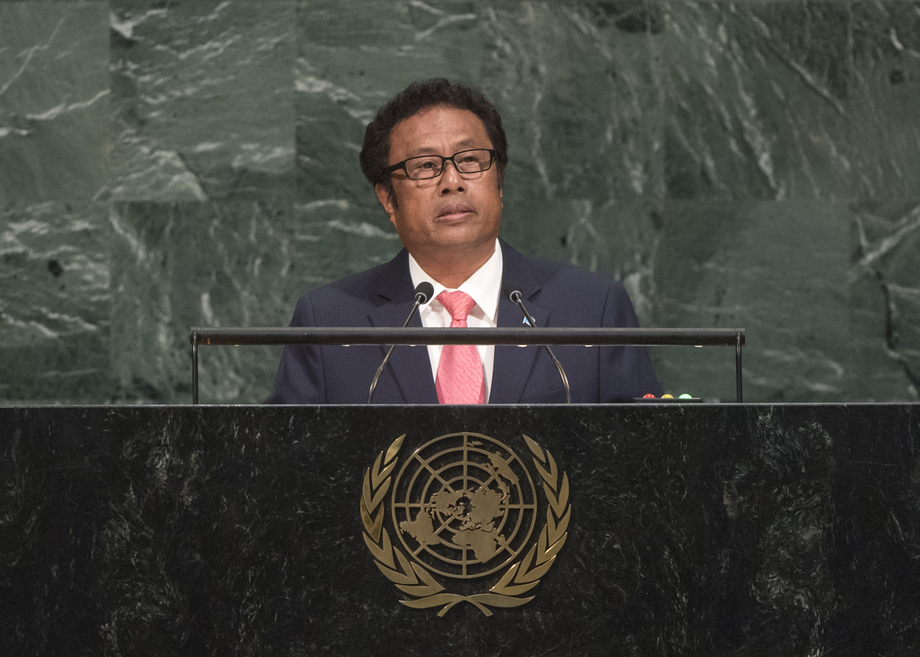 TOMMY REMENGESAU, President of Palau, expressing his sympathies to everyone affected by the recent record-breaking hurricanes, warned that there were many more such storms or “ticking time bombs” to come that could wipe out years of progress in the span of a few hours.  Cooperation among nations must be expanded based on fairness, and the only body that could do that was the United Nations.  Turning to sustainable development, he said that oceans were the lifeline to humanity, and yet, other issues of security and peace often took over the international conversation.  ISIL and the Democratic People’s Republic of Korea continued to threaten peace and security.

Those issues must be dealt with by strong multinational institutions and a strengthened United Nations, he stressed, emphasizing that a decent life for all and a sustainable planet must be the focus of global work.  He expressed support for all efforts and United Nations resolutions to bring Pyongyang to the negotiating table, expressing concern over threats made at Guam.  Pacific small island developing States faced unique security and development challenges, he continued, urging the Secretary‑General to recall the main guiding principle of the 2030 Agenda.  “Leave no country behind,” he stressed.

It was critical to ban nuclear weapons, he continued, calling on leaders to unite to ban their use, test and storage, as Palau’s leaders had done long ago.  On climate change, he said it was essential to achieve the full implementation of the Paris Agreement.  Although small, Palau was proud to commit itself to help protect the oceans, he said, emphasizing its commitment to protecting biodiversity and working towards designating 30 per cent of national waters as marine protected sites by 2030.

Palau was also addressing marine pollution in all forms, he said, adding that such commitments required a broad alliance of partnerships.  He welcomed the continued support of the United States to Palau in its movement towards economic independence.  In such difficult times, Palau supported United States efforts to combat terrorism and reduce the nuclear threat emanating from the Democratic People’s Republic of Korea.  It also had a great “friendship” with Japan and expressed support for that country’s permanent membership on the Security Council.
Ultimately, success would depend on the development of genuine and durable partnerships at every level, he stressed.  Challenges and threats were becoming bigger and more complex.  “At no time in the history of the world was the unity of people more important,” he emphasized, adding that the United Nations had the potential to resolve global issues “only and if only” its members were committed.