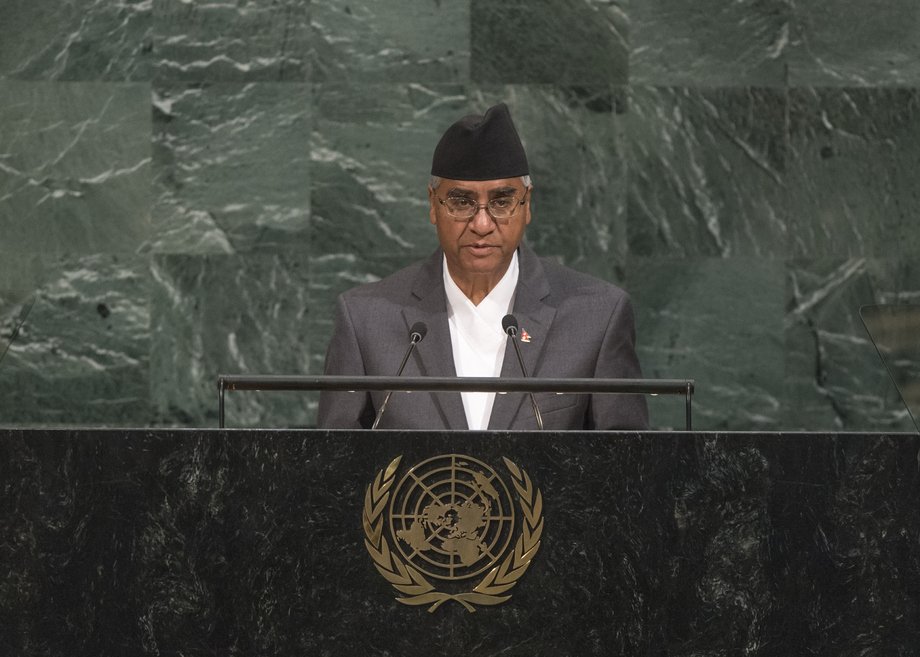 SHER BAHADUR DEUBA, Prime Minister of Nepal, said a big geopolitical transformation was in the making, as inward-looking tendencies in some countries marked by populism on both the left and the right had created confusion in world politics.  The path to peace and decent life for all would remain elusive without resources and commitment to implement the Sustainable Development Goals, he said, noting that only a small fraction of the trillions of dollars spent on arms could help countries in need do so.

As the host to the Regional Centre for Peace and Disarmament for Asia and the Pacific, Nepal had signed the Treaty on the Prohibition of Nuclear Weapons, he said, underlining the need to reactivate the regional disarmament deliberations under the “Kathmandu Process”.  Nepal strongly condemned the defiance of the Democratic People’s Republic of Korea to disarm and urged that country to abide by all relevant Security Council resolutions.

Noting that Nepal had contributed more than 130,000 peacekeepers to the world’s most challenging theatres, he said it was prepared to provide more troops and civilians to that “noble cause”.  He pressed the United Nations to help build the capacity of peacekeeping institutions, noting that Nepal was host to the region’s world-class training centre and the Organization should make the best use of it.  Further, protection of civilians should be at the core of peacekeeping, he said, advocating for sexual exploitation and abuse to “move from zero tolerance to zero case scenario”.  The protection of human rights was enshrined in Nepal’s Constitution, especially for disadvantaged communities including women, Dalits, Muslims, Madhesis and indigenous peoples, he said, noting that Nepal had also banned the death penalty and had presented its candidacy to the Human Rights Council for the 2018-2020 term.

He said Nepal looked forward to a successful outcome of the 2018 Global Compact for Migration and called for national, regional and international efforts to ensure the process created a win-win situation for all.  Stressing that poor countries suffered from climate change despite their negligible role in greenhouse‑gas production, he said the Paris Agreement should be implemented in combination with the 2030 Agenda.  Also, least developed countries and landlocked developing countries had not benefited from globalization and required reliable financing, partnerships and technology transfer to overcome structural impediments.  Nepal sought to project a road map to prosperity and its geographic proximity to India and China provided a rare opportunity to benefit from unprecedented economic transformation in its neighbourhood.

Nepal believed in nonalignment, he said, and judged every issue on its merit without fear or favour.  It also firmly believed in the indispensable role of the United Nations in multilateral affairs and global governance. The under‑representation of developing countries in the Security Council should be addressed.  After a decade of armed conflict and successful transition to democracy, Nepal offered an example of a home-grown and nationally driven peace process, which featured a “culture of dialogue and accommodation”.  As the vast majority of United Nations members were small countries, a stable, rules-based and just world order could not be built without addressing their concerns.