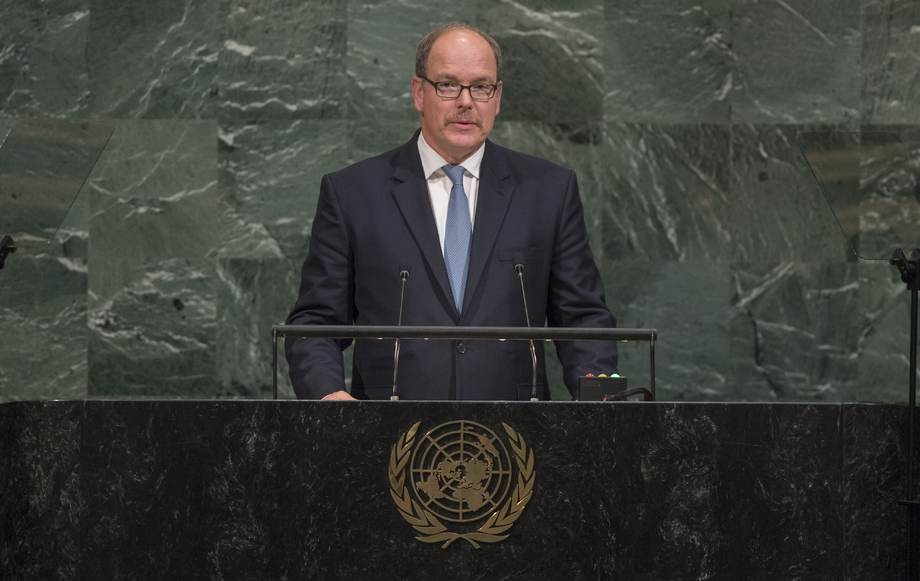 ALBERT II, Prince of Monaco, said the threat of nuclear escalation in Asia had never been greater, adding respect for Security Council resolutions and all Member States was critical to addressing the crisis.  The international community could not fail to act in the face of those threats and must deter those who exposed humankind to disaster.  Monaco lent its support to collective action for peace and security, he said, noting his country’s membership in the Organization for Security and Cooperation in Europe (OSCE) and the Council of Europe.  Working to stop mass suffering was imperative, he said, expressing support for the International, Impartial and Independent Mechanism for the Syrian Arab Republic.

Famine in Africa, largely exacerbated by war, had become a humanitarian disaster, he noted.  Through work with various international organizations and the development of its own strategic plan for public assistance, Monaco was working to guarantee food security and fight corruption.  Key to those ideals was the fight against impunity, and his country was committed to respect for justice and peace.  Attacks claiming innocent lives affected all of us, regardless of where they took place, he noted.

Monaco, boasting cultural diversity, was open to engaging in open dialogue, he said.  It remained steadfast in its support for human rights, democracy, and the rule of law, as those must be the priorities of any modern State mindful of its citizens.  The many crises across the world justify advocacy for basic human rights, especially for the most vulnerable.

Climate change remained an imminent threat to humankind, he said.  Recent natural hazards put into focus the importance of the Paris Agreement and the need to adapt, he continued, stressing that a change in lifestyle was “long overdue”.  Calling attention to “glaring inequalities”, he urged moving forward with a resolve to eliminate sexual exploitation, pointing out that that included those abuses in United Nations peacekeeping missions.  Monaco supported United Nations reform initiatives, he said, adding that he wanted to see the Organization’s staff working towards a noble goal.

Recalling Monaco had presented its first report on the implementation of the Sustainable Development Goals to the high-level political forum in the summer, he said Goal 14 on aquatic marine life was of particular importance to his country.  “Our ability to save the ocean from its gradual decline will enable us to save our planet,” he said.  In that regard, he outlined Monaco’s various activities on the safeguarding of marine protected areas and other related issues.  He concluded by emphasizing that science should guide all States as they worked towards a better world.