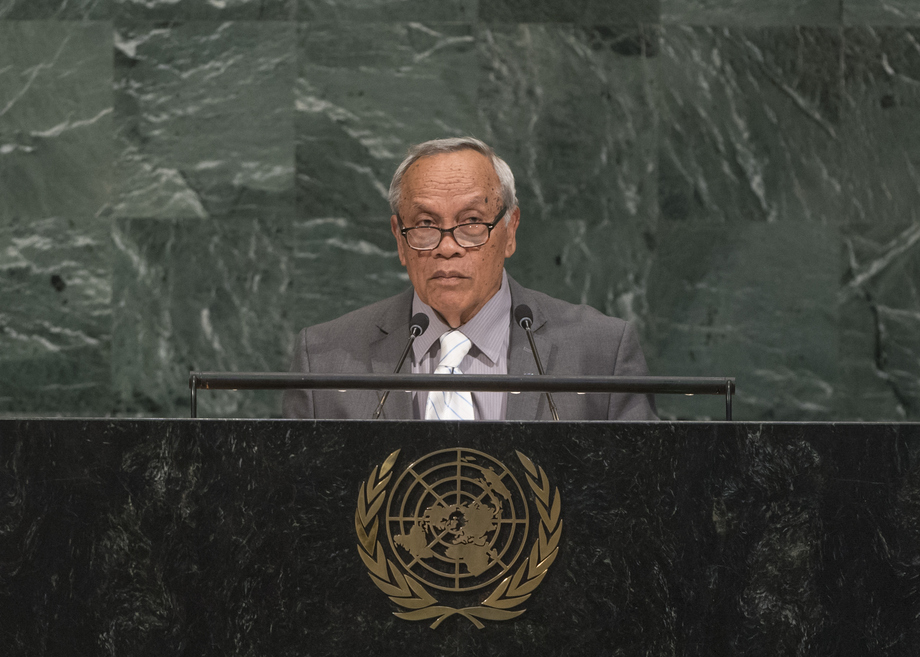 YOSIWO GEORGE, Vice-President of the Federated States of Micronesia, pressed the global community to better combat climate change, which was among the most serious threats to global peace and security and must be at the top of the Assembly’s agenda.  He called for the appointment of a Special Representative on Climate Change and Security, stressing that mitigation efforts were essential to achieving the Sustainable Development Goals.  The Paris Agreement on climate change provided an avenue to enhance cooperation and he called on all States to implement that accord, support the Green Climate Fund and contribute to innovative climate solutions.  He recalled the success of the Montreal Protocol and its Kigali Amendment to regulate hydrofluorocarbons, pressing the remaining parties to ratify that agreement before the next meeting in November.

Expressing support for the 2017 Ocean Conference, held in June, he said his country would support the organization of a second conference in 2020.  At the Pacific Island Forum Leaders Meeting in Samoa, Micronesia had endorsed “the Blue Pacific Identity” as a driver of collective action in the region.  To tackle the mounting threats to the Pacific Ocean, the special case of small island developing States must be enshrined in the implementing agreement under the United Nations Law of the Sea Convention on the conservation and sustainable use of marine biological diversity of areas beyond national jurisdiction, and he welcomed the successful conclusion of the Preparatory Committee.  It was now urgent to launch and conclude the intergovernmental conference to draft and adopt a new legally binding agreement.

As fisheries were a mainstay of Pacific island economies, he called for steadfast efforts to combat illegal, unreported and unregulated fishing.  He expressed concern over the lack of recognition and respect that costal States had in managing fisheries in their exclusive economic zones.  Some developed country fishing nations had advocated flag-based rights in regional fisheries management organizations, measures that would undermine zone-based management measures and erode small islands’ ability — as resource owners — to exercise their sovereign rights.  He called on those partners to withdraw all such proposals and support the efforts to increase benefits from the sustainable management fisheries in exclusive economic zones.

He commended the Secretary-General’s proposed reforms to create a more transparent, efficient and effective United Nations, stressing that they must not disadvantage small island developing States.  The countless hours Micronesia had spent stating its positions on Security Council reform had resulted in little progress.  Provocative and aggressive actions by the Democratic People’s Republic of Korea posed a threat to regional security, and he called on the Council — and countries with power — to help resolve the crisis and ensure peace was achieved on the Korean Peninsula.  “We will all fail our nations and our peoples unless we work together for the common good,” he said.  Multilateralism and the United Nations were more important than ever.