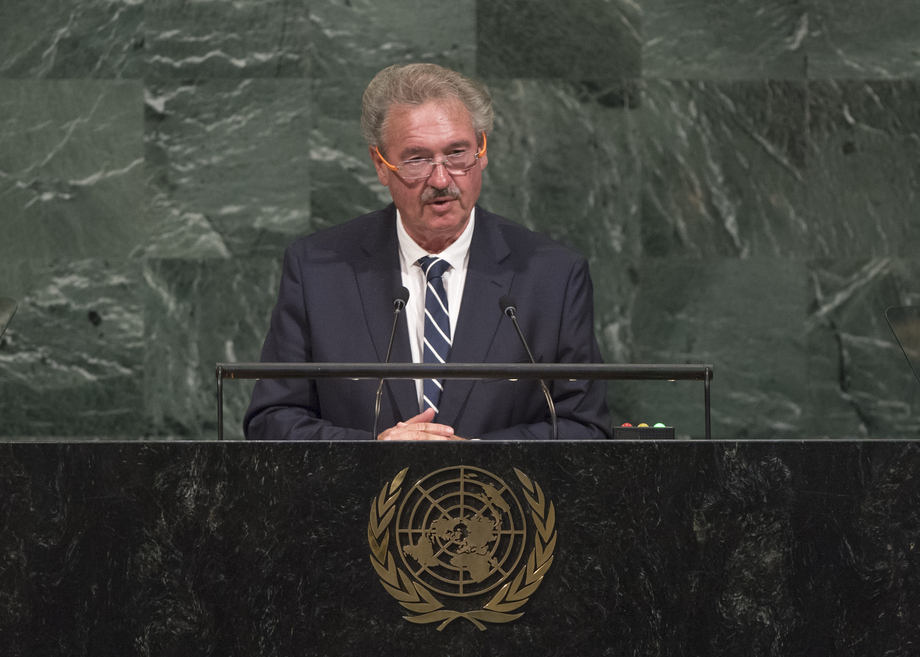 JEAN ASSELBORN, Minister for Foreign and European Affairs of Luxembourg, said that the Security Council must become more transparent and expressed regret that in the last 12 months there had been abusive use of the veto.  The United Nations must have sufficient means to do its work, he added, underscoring the challenges facing the Organization’s budget.  The financing needs of the 2030 Agenda were “enormous”, he said, outlining various initiatives his country had undertaken to finance sustainable development.  Luxembourg was set to adopt a new sustainable development plan which would guide the work of its civil society, Government and business sector for years to come.

Luxembourg’s commitment to the Paris Agreement was complete, he underscored, expressing regret that a major actor had distanced itself from the initiative.  The movement of people was affected by myriad issues, including conflict and lack of economic opportunity.  Millions had been forced to flee to Europe because of “apocalyptic” situations in Syria and Libya.  On the Middle East, he noted that Security Council resolution 2334 (2016) had called on Israel to immediately cease all settlement activities on occupied territories, targeting a status quo that had become unacceptable.  The announcement of the holding of elections in Palestine was a source of optimism.  In the same vein, the trends on the ground were worrying, he said, urging the international community to mobilize for change.

On Syria, he said peace would be restored only from an overarching and inclusive political solution.  “Everything must be done” for the negotiations in Geneva to continue, he added.  He also expressed support to the unity and stability of Iraq, adding that any differences among its people must be resolved within the framework of its Constitution.  He condemned the aggressive actions of Pyongyang, underscoring the need for decisive action from the international community.  Diplomacy could lead to results.  He underscored the need to support African partners in the deployment of the Sahel G-5.  He also emphasized that the scope of the International Criminal Court must not be limited to Africa and called upon all States to participate in its financing.  He expressed support to international initiatives aimed at fighting ISIL, and said that ethnic cleansing had no place in the twenty-first century, neither in Myanmar nor elsewhere.  Luxembourg also supported women’s and girls’ access to health and reproductive rights.

Europe had not been spared from the pressures in the international order, he continued, spotlighting the growing tensions in eastern Ukraine.  Europe was not free of upheavals of globalization.  It was a victim of terrorism.  Political movements in Europe were being fed by anti-immigrant rhetoric, he continued, urging the continent to renounce insularity and adopt a multilateral system.