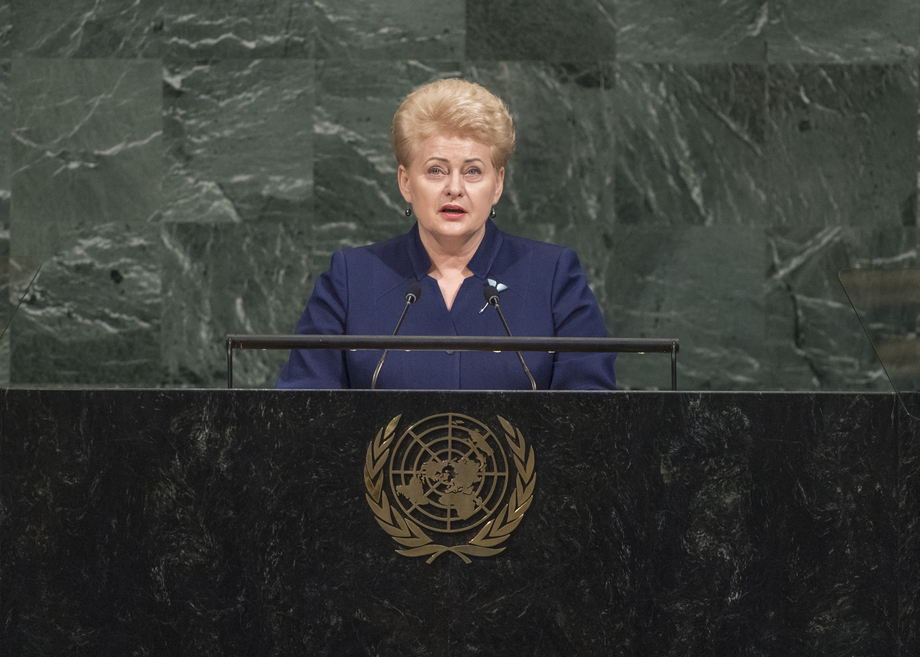 DALIA GRYBAUSKAITĖ, President of Lithuania, said the world’s peaceful future was under threat like never before.  Authoritarian regimes killed with impunity, extremists treated innocent people with unspeakable cruelty and thousands of people continued to die leaving their homes in search of a better life.

She said while the world’s attention was now focused on the Democratic People’s Republic of Korea and Syria, it was important to realize that the same methods of blackmail, bullying and aggression had been used by the Russian Federation in Ukraine and along the eastern borders of the North Atlantic Treaty Organization (NATO).  Some 100,000 Russian troops were engaged in offensive military “Zapad 2017” exercises on the borders of Baltic States, Poland and in the Artic.  “The Kremlin is rehearsing aggressive scenarios against its neighbours, training its army to attack the West,” she said, an exercise that was part of an information warfare aimed at spreading uncertainty and fear.

Moreover, she said, the Russian Federation had violated the United Nations Charter by attacking Georgia, illegally annexing Crimea and participating in the war in eastern Ukraine.  It continued to meddle in elections, conduct cyberattacks and use its “sputniks” to spread fake news and destabilizing propaganda.  Energy blackmail was also the country’s weapon of choice.  She pointed to Astravets, an unsafe nuclear power plant built by the Russian Federation in Belarus just 40 kilometres from Lithuania’s capital Vilnius, calling it a “geopolitical weapon that fails to comply with basic international nuclear standards”.

Such examples of abuse and indifference to basic international norms stemmed from a collective failure to condemn and properly react to violations, she said.  “Time and time again we have no courage to enforce the rules that we ourselves create,” she said.  “We draw red lines in the sand and then pretend they don’t exist.”  The international community must step up to stop aggression.  “We cannot let fear win by closing our eyes to violators, because it will only encourage them to go further,” she stressed.  Countries must learn to read the warning signs, such as abuse of human rights, nationalist rhetoric and suppression of free speech, which could explode into violence.

Importantly, the United Nations must change in order to prevent violence and aggression, she said.  Unfortunately, the Organization had not fulfilled its goal of preventing war.  “Now we face the choice:  either we give this Organization the voice to rise against the abuse or we will make it irrelevant,” she said.