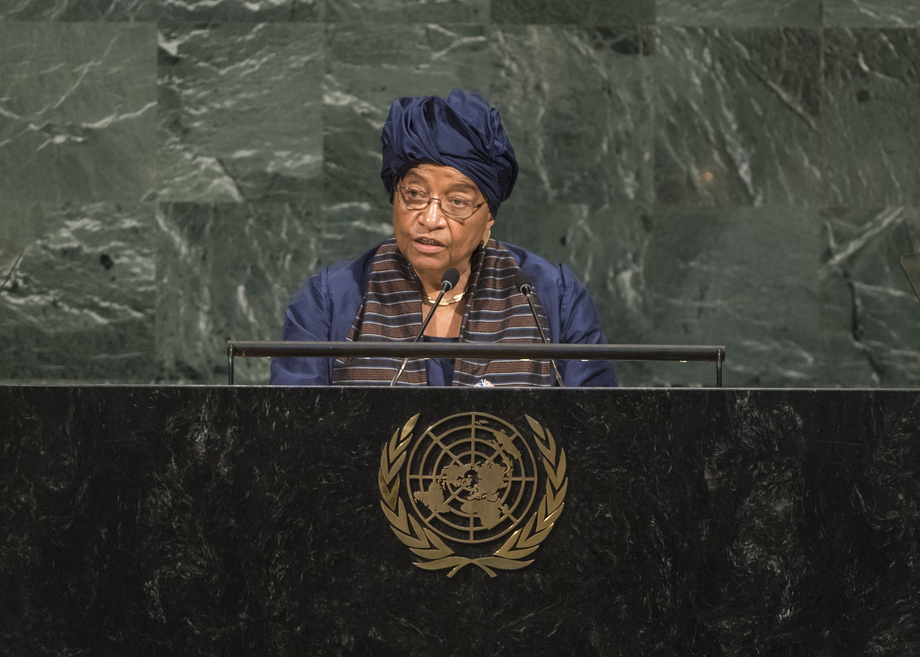 ELLEN JOHNSON SIRLEAF, President of Liberia, said the seventy-second session was taking place at a time of historic transition in her country, as well as amid acute challenges to the world order.  The session’s theme, “Focusing on people — striving for peace and a decent life for all on a sustainable planet”, aptly captured a universal aspiration.  “The work of the United Nations has never been more important to the search for peace and the sustenance for global stability than it is today,” she said.  Noting that the Organization offered great hope to a troubled world, she stressed that “Liberians bear witness to this truth” and remained grateful for United Nations support.

Recalling that, 11 years ago, she had first stood before the Assembly as Liberia’s newly elected President and the first democratically elected woman Head of State in Africa, she said her country was now just 22 days away from holding historic legislative and presidential elections.  They would mark the first time in 73 years that political power would be handed over peacefully and democratically from one elected leader to another, and signal the country’s irreversible course towards consolidating its young, post-conflict democracy.  Outlining some of Liberia’s progress since the end of its 15-year civil war, she said it had reshaped its armed forces and national police, transformed its economy and embraced diversification.

Moreover, she said, previously dysfunctional public institutions now had the capacity to respond to the needs of citizens.  Infrastructure was being repaired, while the increasing provisions of electricity, potable water and technology had resulted in cities and towns that were “bustling with new life”.  Liberia had enjoyed the benefits of multilateralism through support provided by the United Nations, the African Union and the Economic Community of West African States (ECOWAS).  “From a pariah State, Liberia has gradually regained the confidence of nations,” she said, adding that the country had empowered ordinary citizens and fostered a shared sense of ownership, giving women a voice and the right to be heard.  It was establishing transborder development corridors to enhance regional trade and strengthening the rule of law to tackle systemic corruption.

“Liberia has come a long way,” she said, emphasizing that it could not have done so without the United Nations, especially the stabilization and security provided by the United Nations Mission in Liberia (UNMIL).  In that context, she urged the United Nations and its Member States to continue to lead, to spread the values of democracy, human rights and good governance, while also strengthening solidarity for economic transformation and social resilience.  It must also remain committed to achieving the 2030 Agenda’s 17 Sustainable Development Goals, as progress was inextricably linked to ending conflict and sustaining peace.

Noting that progress had been elusive in lingering efforts to reform the Security Council and make it more responsive to current realities, she said that call for reform must be pursued more robustly towards an early conclusion.  Africa’s views on that matter had been articulated in the Ezulwini Consensus, and today, its countries were participating in strong regional and subregional bodies that were evolving to preserve peace and security, while strengthening economic integration.  The United Nations must continue to evolve to more effectively serve the common interest of all Member States, she said.