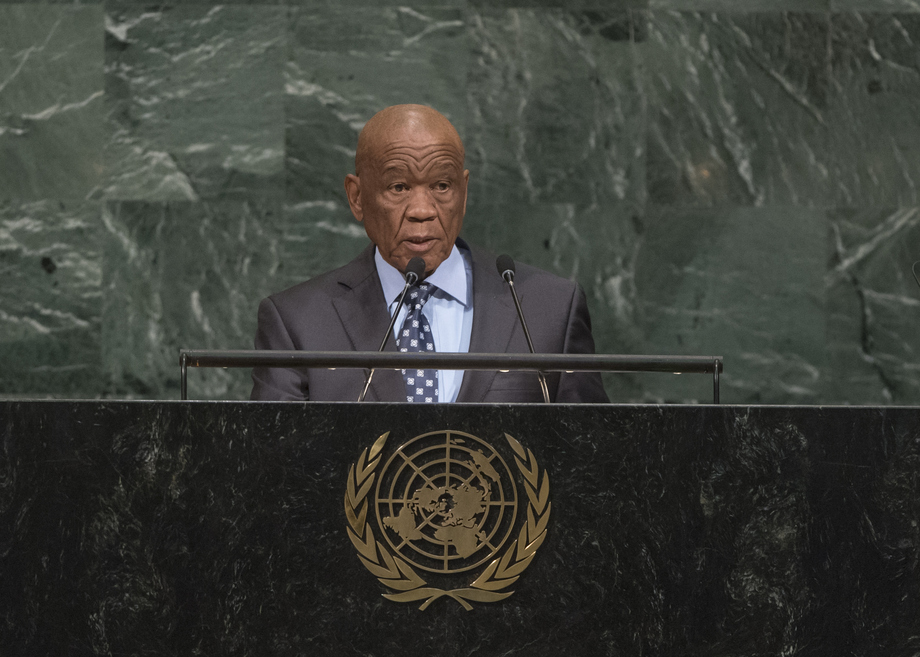 MOTSOAHAE THOMAS THABANE, Prime Minister of Lesotho, said that sadly, the world was regressing to the one that existed seven decades ago, with multifaceted and complex challenges threatening to erode the laudable strides made by the United Nations since its formation.  The Organization’s ability to resolve conflicts was being put to the test.  Respect for human rights and the rule of law was being flouted with impunity.  Women and children in particular faced brutal forms of abuse, while poverty was undermining developing countries’ efforts to reorient their economies towards real growth.  The international community must act in unison, he said, calling for a new strategy that would encapsulate the Sustainable Development Goals and integrate a focus on people.

With its newly inaugurated Administration, Lesotho intended to embark on an ambitious yet achievable reform programme, he said.  The Government was committed to strict fiscal discipline, combating corruption and harnessing the energy of Basotho youth to advance the economy.  Lesotho was still dealing with HIV/AIDS, which was more prevalent among women, he said, adding that putting more women into leadership positions — in both the public and private sectors — would lead to a more equitable and prosperous society.

Underscoring the challenges faced by landlocked developing countries like his, he called for increased international assistance in infrastructure, institutional capacity-building and industrialization.  Prolonged droughts in Lesotho — along with hurricanes in the Caribbean and United States, and torrential rains elsewhere — were stark reminders of climate change.  Urgent action must be taken in line with the Paris Agreement, he said, calling on the international community to provide Africa with more financial resources for climate-friendly technologies.
The business of decolonization remained unfinished, he said, citing the questions of Western Sahara and Palestine.  There must be renewed determination to fight injustices perpetrated against the Saharawi Arab Democratic Republic.  The Treaty on the Prohibition of Nuclear Weapons must be ratified and implemented by all.  The United Nations was the only universal institution that could safeguard world peace and ensure the survival of all, he said, but to fulfil its role, its reform agenda must go forward without delay.  A reformed Security Council that was transparent and representative of all regions, including Africa, would go far towards fulfilling the ideas for which the Organization was formed.