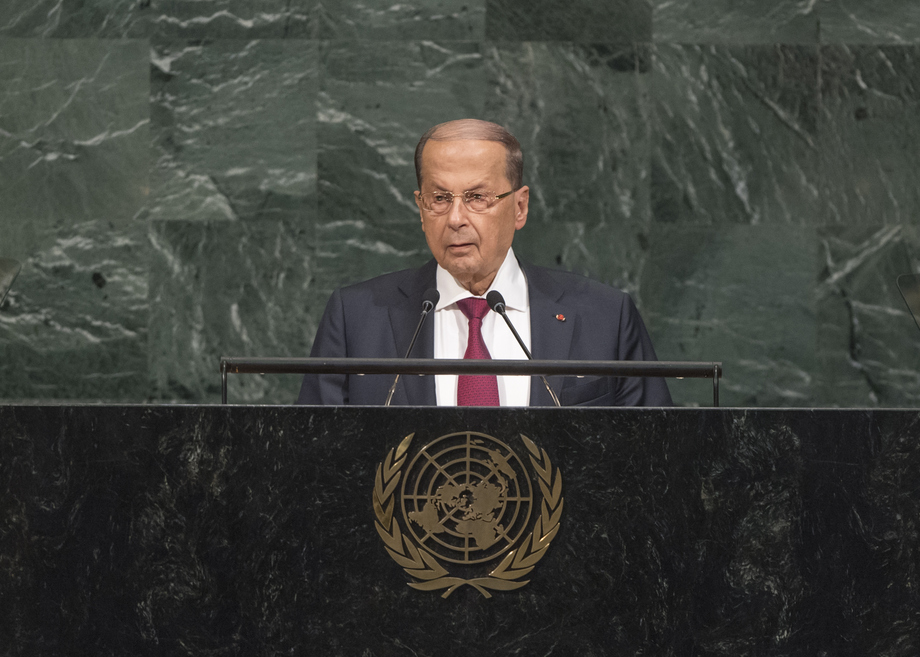 MICHEL AOUN, President of Lebanon, recalled that, 16 years ago, terrorism had struck New York and claimed thousands of lives.  “This tragic event ignited an international war against terrorism,” which had now spread and lost its purpose, he said, noting that many countries in the Middle East had borne the brunt of its results.  Terrorism had since grown bloodier and spread to all continents.  “No one knows how far this terrorism will reach and how it will end,” he said.  While Lebanon had been one of the phenomenon’s earliest targets, the Government had prevented anyone from crossing the red line of national security and stability.  Indeed, despite terrorists’ abilities to organize in some towns and cities, Lebanon had been able to eliminate terrorists, as had recently been seen in its victories against ISIL/Da’esh along the border with Syria.

“The Lebanese people have proven that they are humanitarian and responsible,” he said, noting that they had welcomed Syrian refugees, sharing food, schools and other resources with them.  Nevertheless, waves of displacement and refugees had increased Lebanon’s population by 50 per cent, he said, citing severe overcrowding, a deteriorating economic situation and increased crime.  More dangerous was the fact that terrorists had taken shelter among the refugees, making the need to resettle displaced persons to their homelands urgent.  Lebanon distinguished between “voluntary” and “safe” return, based on the reasons for displacement.  In cases of individual asylum for political reasons, political refugees would voluntarily decide when to return, with acceptance by the host country.  Lebanon considered the collective asylum taking place in its territory — for economic and security reasons — as displacement, rather than asylum, as it had not received host country acceptance, and thus, constituted “population invasion”.

Responding to claims that those people would not be safe if they returned to Syria, he said Syria’s Government had now taken back some 85 per cent of its territory and was reconciling with armed groups.  Displaced persons were living in misery and unhealthy environments, despite the support Lebanon had provided, and it was painful for Lebanon to be unable to improve their situation.  “There is no doubt that it would be better if the United Nations assisted them in returning to their homeland rather than helping them remain in camps,” he stressed.  Noting that thousands of Palestinian refugees also remained displaced from their homeland, he said no serious efforts had been made by the United Nations — or Security Council — to implement the two-State solution.  The crime of expelling Palestinians from their land could not be rectified by another crime against the Lebanese people by imposing neutralization, or against the Palestinians, by denying them the right of return.

Noting that all those conflicts had trapped the Middle East in poverty and turned it into a hotbed of extremism, he said any solution should be accompanied by economic and social measures aimed at achieving growth and improving social conditions for young people.  He called on the United Nations to seriously consider establishing a “joint Eastern market”.  Spotlighting Lebanon’s historic ethnic and religious diversity, he warned that “World War Three has taken a new form” as countries — suffering from religious or ethnic extremism — now rejected each other’s right to exist.  “The division of States into sectarian or ethnic groups is not the solution, and it would not prevent wars,” he stressed.  On the contrary, it would only increase fanaticism, extremism and conflicts.  He proposed the creation of an institution dedicated to providing peace education, with a focus on forgiveness and coexistence, and that Lebanon become a permanent centre for such dialogue.  He also put forward Lebanon’s candidacy for a non-permanent seat on the Security Council.