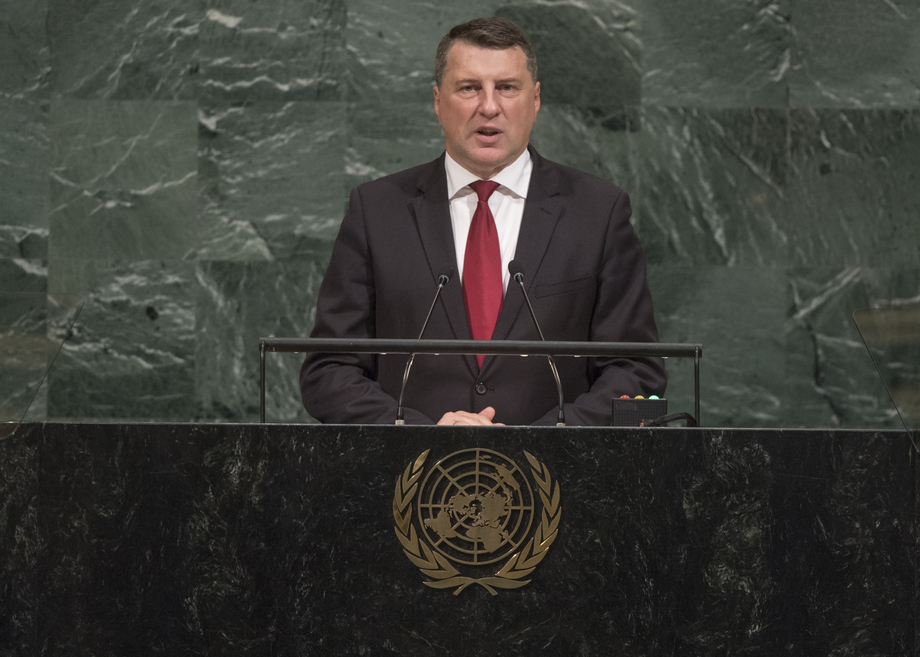 RAIMONDS VĒJONIS, President of Latvia, said the United Nations must overcome current bureaucratic complexities to swiftly respond to today’s challenges and bring positive influences to people on the ground.  While the most recent global agreements had demonstrated that effective multilateralism was possible, “we must bring the values and goals of the United Nations closer to the people,” he said, emphasizing Latvia’s support for the Secretary‑General’s vision of a more effective Organization.

Security was of prime importance, he said, adding that the Council bore a responsibility for ensuring peace.  As such, its “veto-wielding” members should move beyond their domestic interests in the name of genuinely addressing global challenges.  Conflict prevention must be at the core of United Nations action to keep relevant situations from spiralling out of control.  He also voiced deep concern about the proliferation of weapons of mass destruction.  Strongly condemning the Democratic People’s Republic of Korea’s recent actions that had increased global instability, he called on that country to return to credible dialogue with the international community and refrain from any further actions that could worsen tensions.  A peaceful and diplomatic solution must be found and all States must implement relevant Council resolutions.

Turning to other concerns, he also called for accountability regarding the use of chemical weapons in Syria and affirmed his country’s continued support for the Syrian people and the United Nations-led peace process towards a political solution of the conflict.  Welcoming victories in crushing Da’esh, he said the fight against global terrorism was far from over and new strategies must be identified to confront emerging threats.
Solving existing conflicts was essential for preventing new ones, he said, expressing support for the rules-based security order in Europe.  The territorial integrity of all States must be respected by all, including the Russian Federation, whose unprovoked aggression against its neighbours was a serious breach of international security rules.  Those violating international law must be held accountable.  A peaceful resolution to the conflict in Ukraine was a priority and the Russian Federation’s aggression and illegal annexation of Crimea could not become “business as usual”.  Conflicts in Nagorno-Karabakh, Transnistria, Abkhazia and South Ossetia must also be resolved.

Attention was needed to address the root causes preventing States from attaining sustainable development, as well as combating climate change and its effects on global security, he continued.  The 2030 Agenda implementation mechanisms must be put in place at national, regional and global levels in true partnership with all stakeholders.  Latvia’s experience with development cooperation had shown the importance of strengthening capacities of partner countries.  To enjoy peace and development, societies needed space and institutions for public debate, he said, outlining Latvia’s approach of supporting press freedoms to counter malicious propaganda emanating from State and non-State actors.  While the United Nations must adapt to a changing global environment, he emphasized that the Secretary‑General could not do that alone.  “We all must work together to ensure that our Organization functions better and is fit for its purpose,” he said.